Donald T. Fraser (1888-1954) graduated from medical school at the University of Toronto in 1915 and then joined the Royal Army Medical Corps serving in Egypt and France.

The Frasers were an academic family. His grandparents were German, and the entire family was fluent in German. In spite of their Germanic roots, there was no question of their support for the British and allied forces.

Donald’s letters describe new sites and experiences on the front and convey concern about medical practices in unsatisfactory conditions. The letters of his mother, Helene, and sister, Frieda, describe their active Red Cross work to raise funds in support of the war effort. 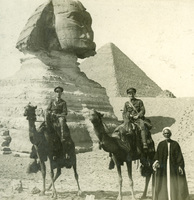