Slavery, as an institution, survived on illiteracy and cruelty. Slaves were dependent upon their masters, and yet there was no espoused standard of care. Simcoe’s Act to limit slavery not only prohibited further slave importation, but assured freedom to all children born to slaves at age 25, and to their children at birth. This meant that that slave owner bore the full responsibility for caring for offspring of their enslaved "servants", but the law, in principle, ensured they could not be sold away.

From the very beginning, black children and white children were educated together in the Town of York. Some were children of slaves, their education paid for by their "owners". But there were also free blacks who valued education and took advantage of the opportunities before them in the free colony of Upper Canada. Freedom-seekers, who had been denied literacy in slavery, were committed to gaining an education for their children and for themselves. Black children attended the city's public schools alongside those of European settlers, and many adults learned to read in Sunday Schools organized by African-Canadian churches.

Since institutions of higher learning had been integrated from the beginning, young people came from across the province to attend. School registers from Upper Canada College, King's College and the later University of Toronto, the Toronto Normal School, and from various medical and divinity schools, reveal the names and stories of black students who excelled in their studies, won prizes, and went on to become leaders in the city. 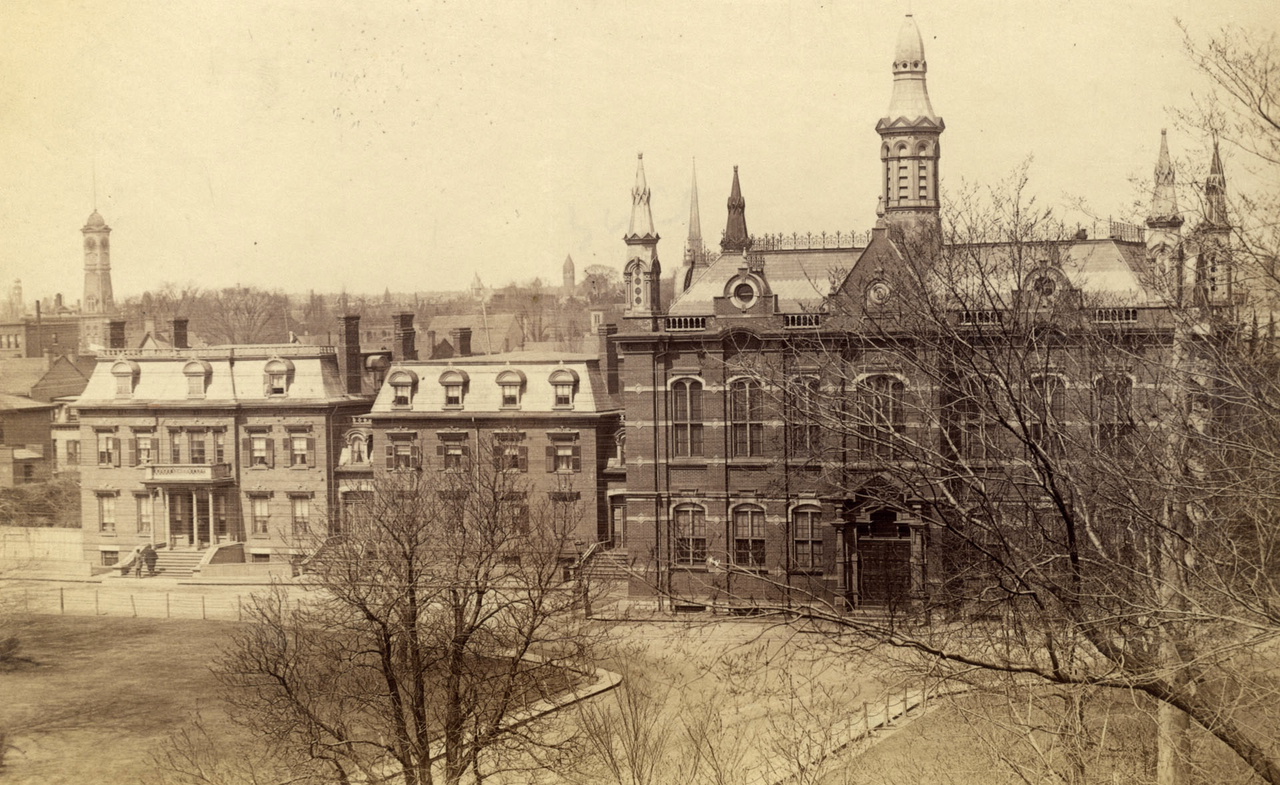 Toronto was the only community in Upper Canada (Ontario) where institutions of higher learning were not segregated. Early school registers from Upper Canada College record the achievements of a number of African-Canadian students.

Peter Gallego was the son of a free Black family from Richmond, Virginia, who lived on York Street. He was a special protégé of Bishop John Strachan, and attended both Upper Canada College and King's College.

Alfred Lafferty, whose father was a formerly-enslaved carter, won both the Governor General's Prize and the Mathematics Prize at UCC. He later became Principal of the Wilberforce Institute in Chatham, and studied to become an attorney.

William H. Abbott, the younger son of Wilson and Ellen Abbott, attended Upper Canada College in 1859. He was ordained a British Methodist Episcopal Minister in 1875. 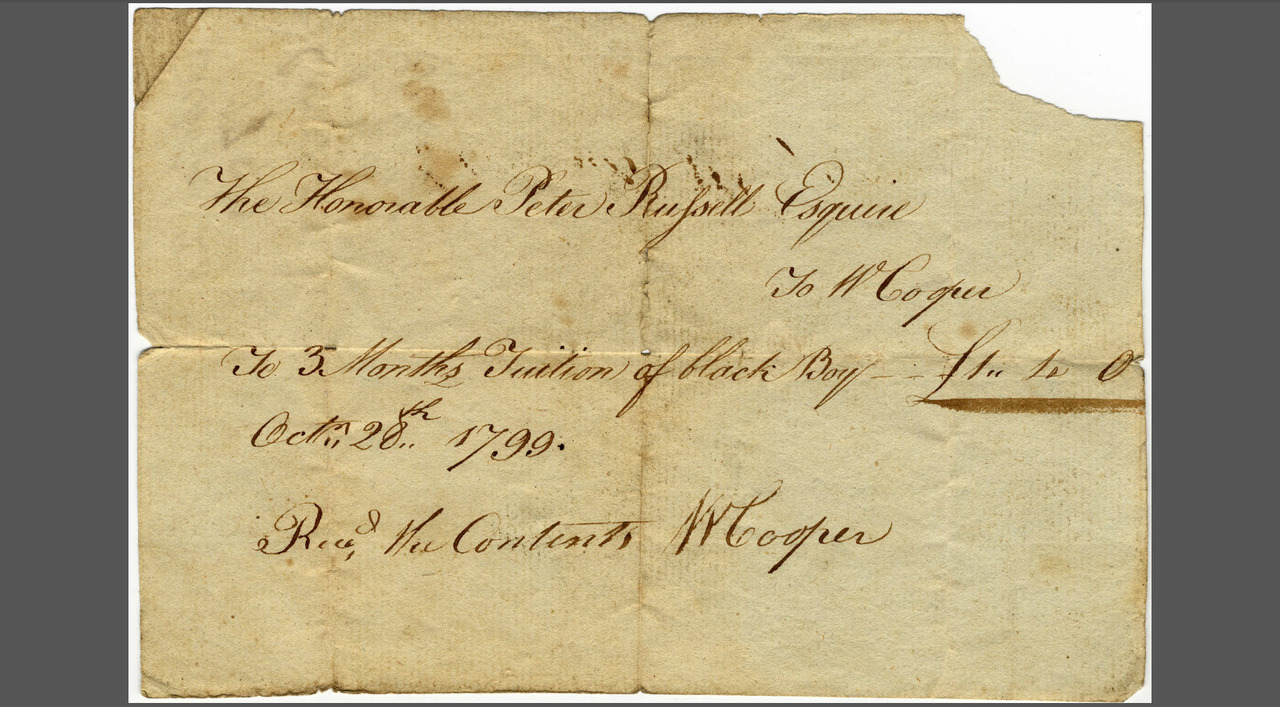 William Cooper opened and operated what may have been the earliest primary school in York, teaching the children of prominent local citizens and military personnel. His school was open to everyone who was able to pay the fee. This invoice indicates that Peter Russell paid for three months of schooling for one of the slaves in his household. 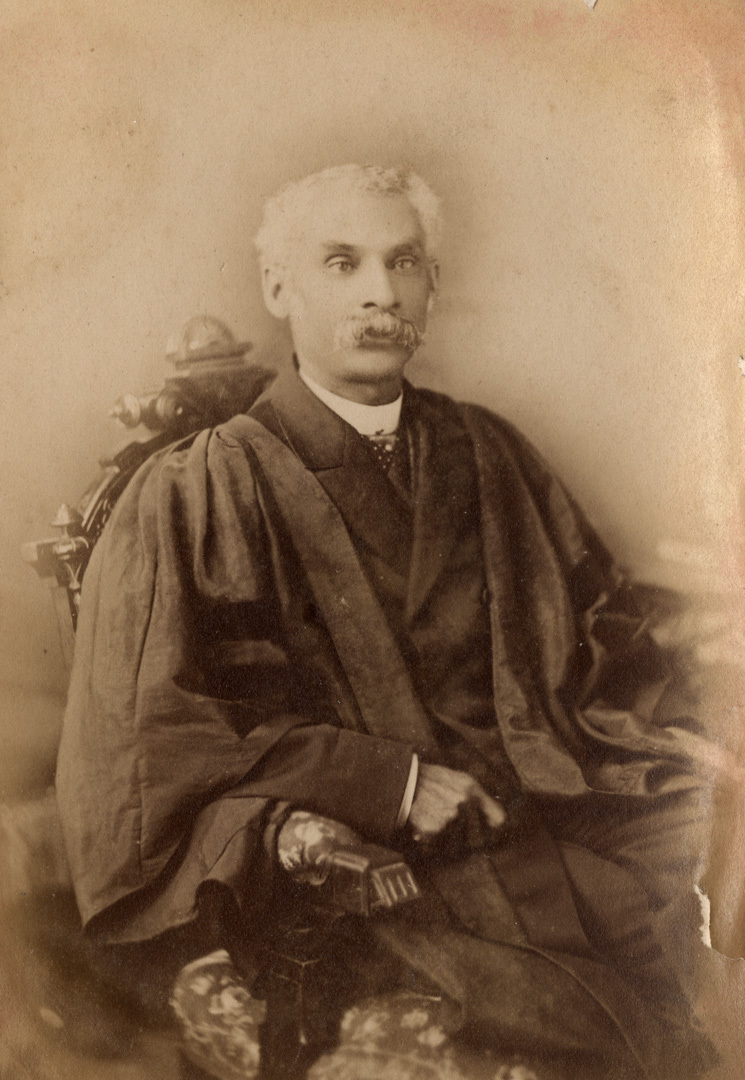 Anderson Ruffin Abbott entered the Toronto School of Medicine in 1857. He studied for four years under Dr. Alexander Thomas Augusta, who had come to Canada from the United States after being rejected from American medical schools on racial grounds. Dr. Abbott received a license to practice from the Medical Board of Upper Canada in 1861. He was admitted to the College of Physicians and Surgeons of Upper Canada. Dr. Anderson Ruffin Abbott was the first black Canadian-born doctor. He had a long and very successful medical career. 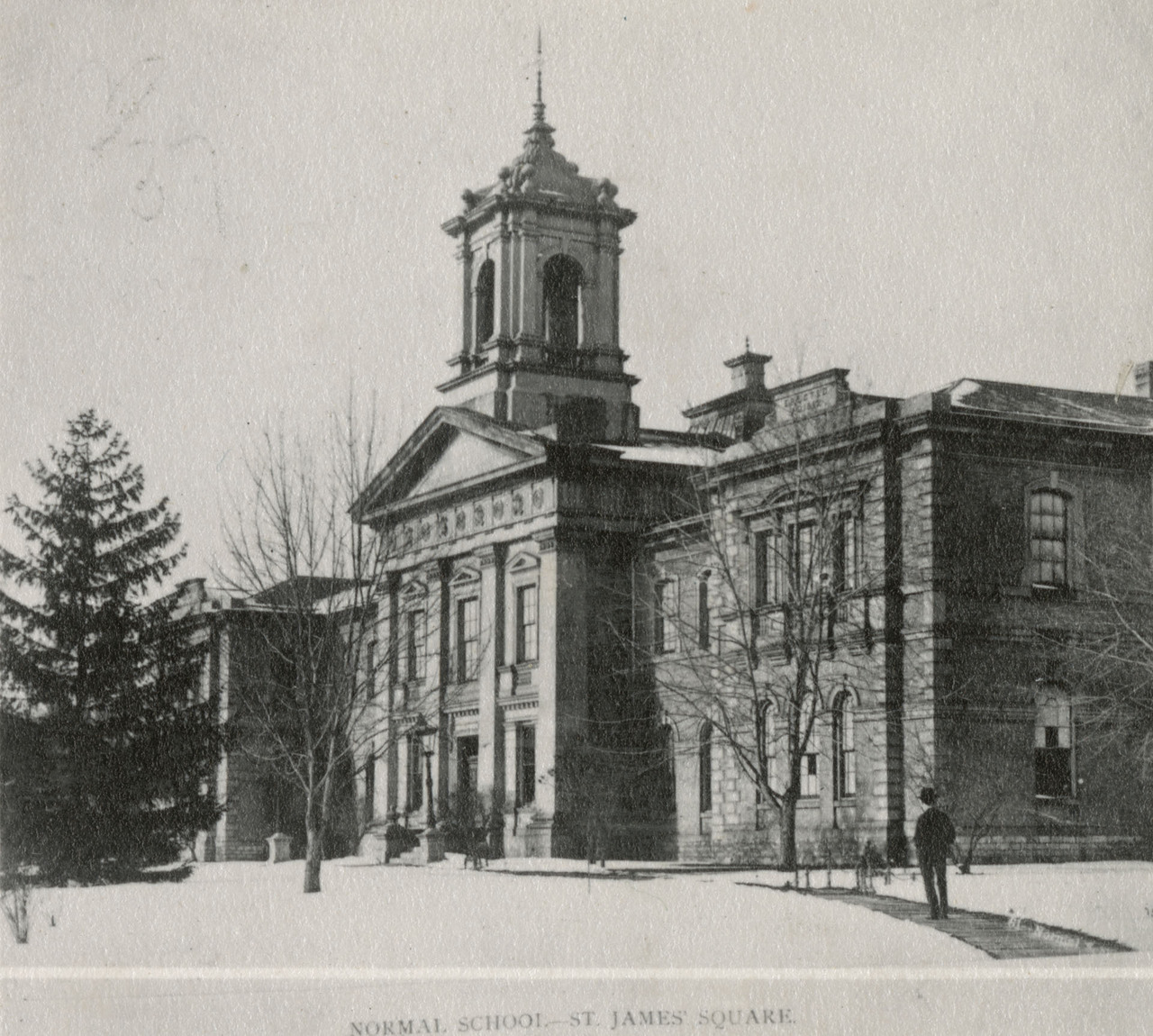 The Toronto Normal School, originally located at Church and Gould. was established in 1847 by Egerton Ryerson. It was the teacher’s college for the province. The Toronto Normal School was integrated from the time of its founding, and graduated such noted educators as Emeline Shadd, who became the first female professor at Howard University in Washington, D.C., and James T. Rapier, who went on to be elected one of three black congressman from Alabama during the Reconstruction. 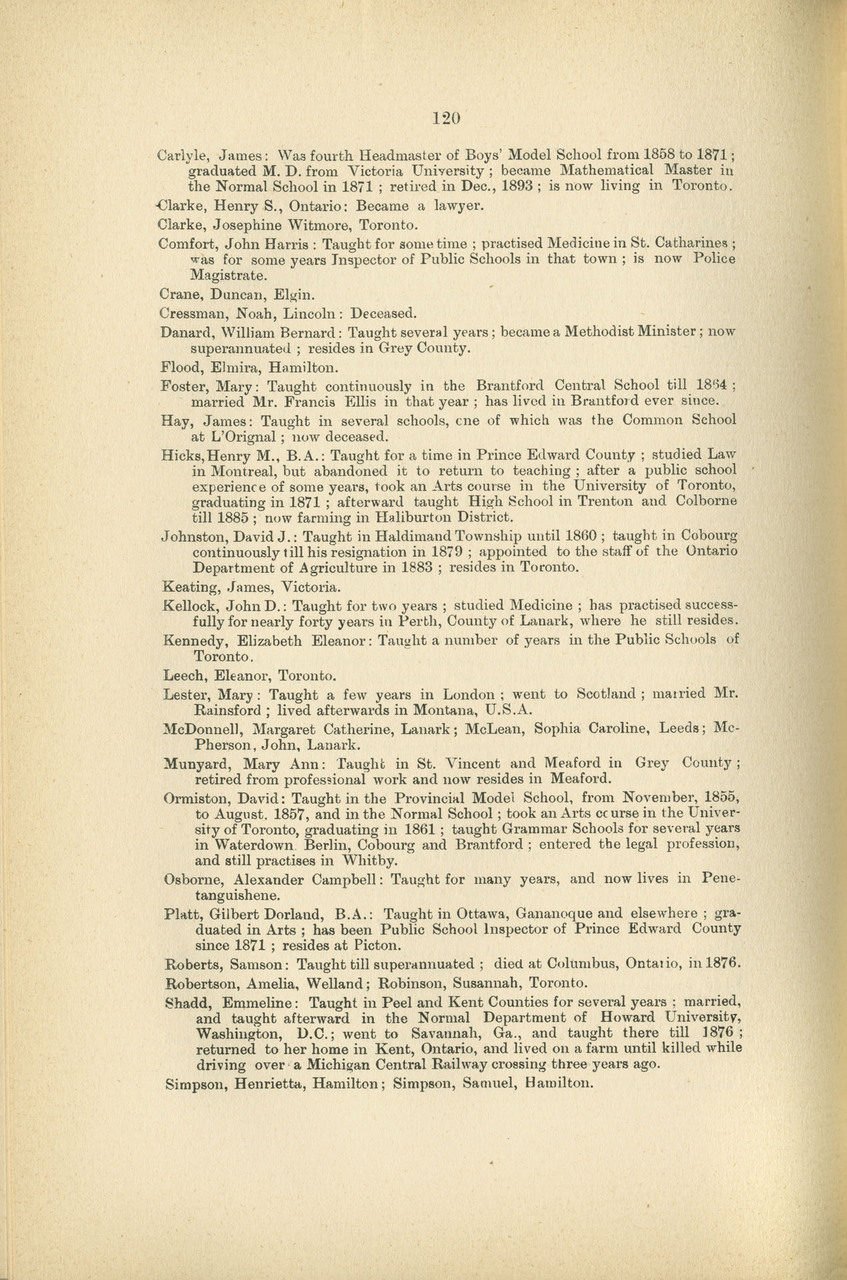 Emeline Shadd was the daughter of the noted black abolitionist Abraham Doras Shadd, and the sister of Mary Ann Shadd Carey, the publisher of the Provincial Freeman. Emeline Shadd attended the Toronto Normal School, where she graduated at the top of her class and obtained a First Class Teaching Certificate. She taught in Caledon, Ontario in 1860, and became the first teacher at a new integrated school in Shrewsbury on Lake Erie. Following the American Civil War Emeline Shadd traveled to the Sea Islands off Georgia to teach former slaves to read, and later became one of the first female professors at Howard University in Washington, DC. 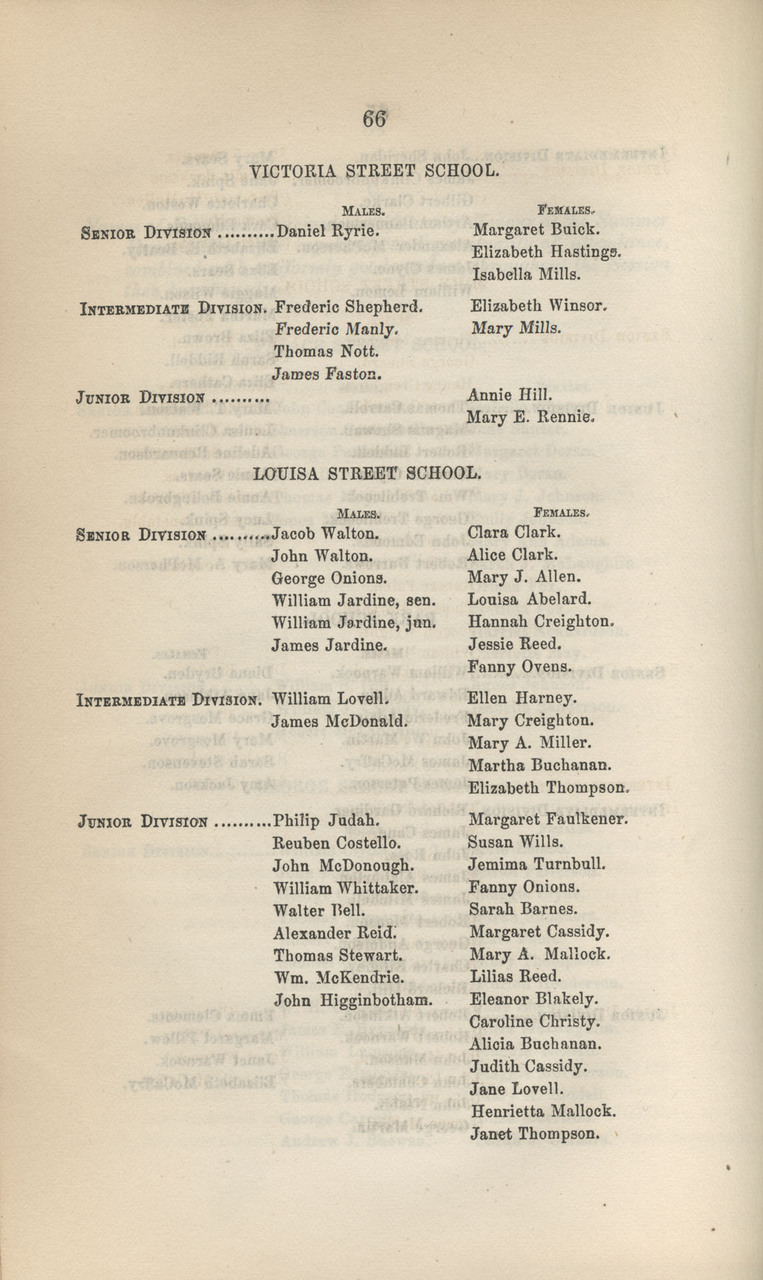 Report of the past history and present condition of the common our public schools in the City of Toronto
Toronto: Lovell & Gibson, 1859

Louisa Street Elementary School was the local school for many African Canadians. The School Superintendents’ Report for 1859 shows Reuben Custaloe and Philip Judah as prizewinners. Reuben Custaloe was the grandson of John M. Tinsley, a free man from Virginia who came to Toronto in the 1840s and ran a very successful construction company. Philip Judah was the son of Adolphus Judah, and the brother-in-law of Anderson Ruffin Abbott. The Judah family valued the education that was available in Canada: Adolphus Judah was a founder of the Association for the Education and Elevation of Coloured People and his son Philip was active in black Toronto’s political and cultural life. A successful businessman, Philip Judah operated a luxury grocery store on the northwest corner of Queen and Beverly Streets. 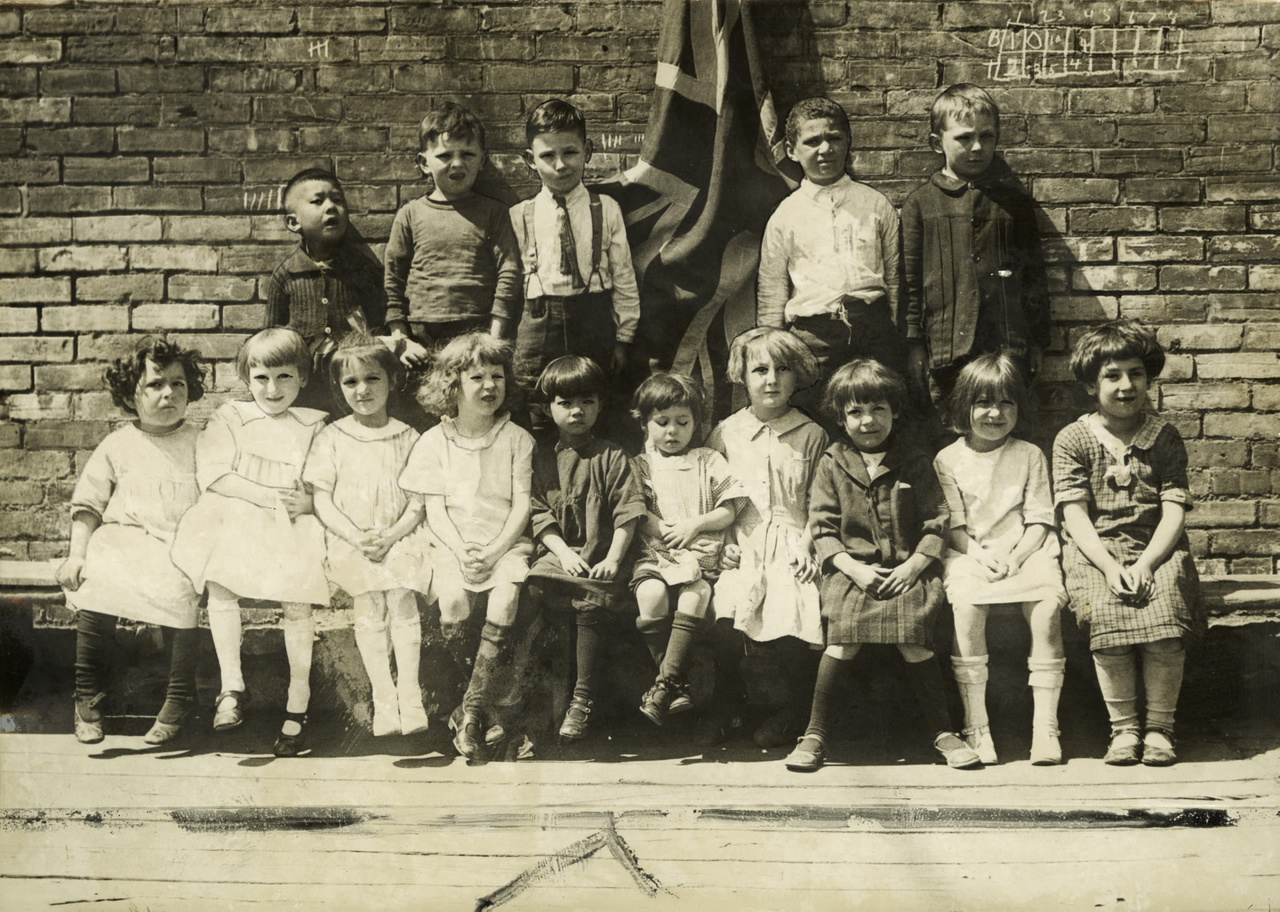 St. Johns Ward was a transitional immigrant neighbourhood, where families from many backgrounds lived, worked and went to school. This image of York Street school, taken in 1923, was published page 12 of the Globe, June 1, 1923, with the following words:

Written in pencil on the back of this photo: "Fourteen nationalities are represented in this group at York St. School." The article identifies various nationalities — but not the names of the children.

Do you know who any of these children might be? Can you help us uncover another piece of Toronto’s social history? Click on the image to add your comments.