Toronto was the only place in Canada where churches, schools and public spaces were never segregated. Organized religion provided an opportunity for African-American immigrants to worship together, to socialize, to coalesce as a community and to respond to issues of social justice.

Most black Americans followed either the Baptist or Methodist faiths. The influx of immigrants to Upper Canada in the first half of the 19th Century introduced new denominations to the Anglican colony. A number of Baptist, and Methodist Episcopalian churches were founded in Toronto during the 19th century. The black population was instrumental in the formation and development of several congregations.

The first Baptist church in the Town of York was established by charismatic African-American minister Washington Christian when he gathered together a dozen formerly-enslaved men and women on the shores of Lake Ontario in 1825. They were joined by white immigrants from Britain and the United States. By 1841, an observer noted that “the congregation included an equal number of blacks and whites, under a black pastor”.

Toronto's African-Canadian churches were centres not only of faith but also of education, community-building, and political protest. Benevolent societies, youth groups, intellectual associations and fraternal orders operated out of the churches. Antislavery leaders, including African-American abolitionist Frederick Douglass, addressed Toronto audiences from their pulpits. 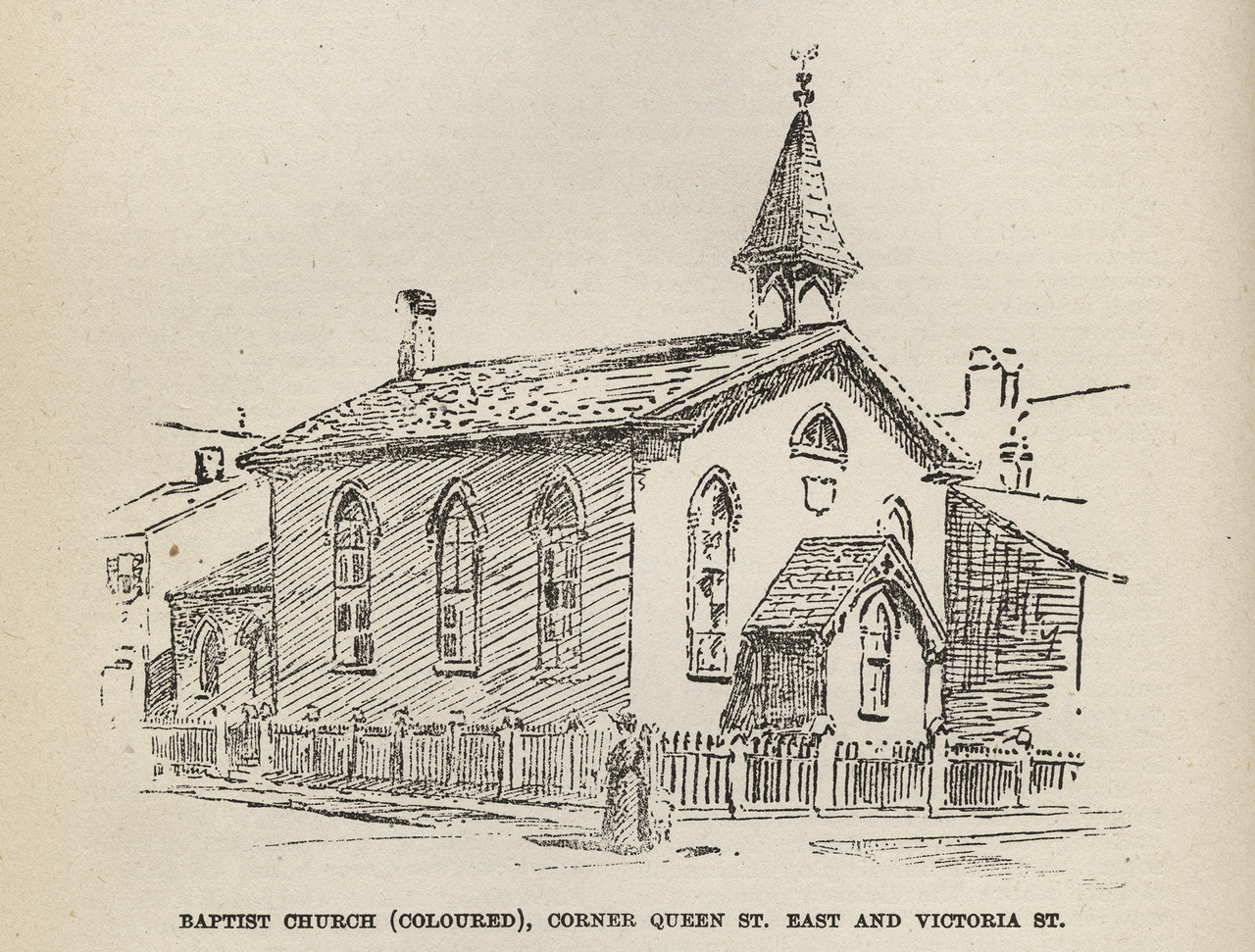 The first Baptist church in Toronto was founded in 1826, when a group of freedom-seekers gathered on the shore of Lake Ontario for worship. This was not only the first Baptist church in Toronto, it was also the first black institution in the Town of York. Although a separate church for white Baptists was established, there were always some white congregants who worshipped at First Baptist, which was pastored by the charismatic and eloquent Reverend Washington Christian.

The Coloured Wesleyan Church, on Richmond Street near York, was founded in 1838 by Wilson Ruffin and two others. The original lot was purchased from John Cawthra and James Lesslie for 125 pounds. The church eventually closed in 1891.

The history of the Coloured Wesleyan Church, on Richmond Street near York Street, is detailed from the time of its founding in 1838. It was established by Wilson Ruffin Abbott and two other black men in Toronto, in reaction to the white Methodists who were in fellowship with churches supported by slaveholders in the southern United States. The church eventually closed in 1891. 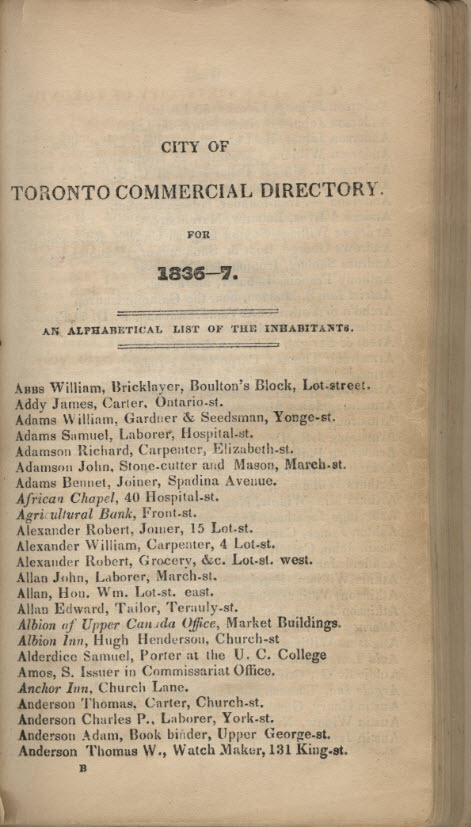 The City of Toronto and the Home District commercial directory and register with almanac and calendar for 1837
George Walton
Toronto: Printed by T. Dalton and W. J. Coates, 1837

This entry from the 1837 Toronto Directory lists the African Chapel at 40 Hospital Street (now Richmond Street).  The African Chapel was founded in 1831 and completed in 1832, with the Reverend Samuel H. Brown as the first preacher. 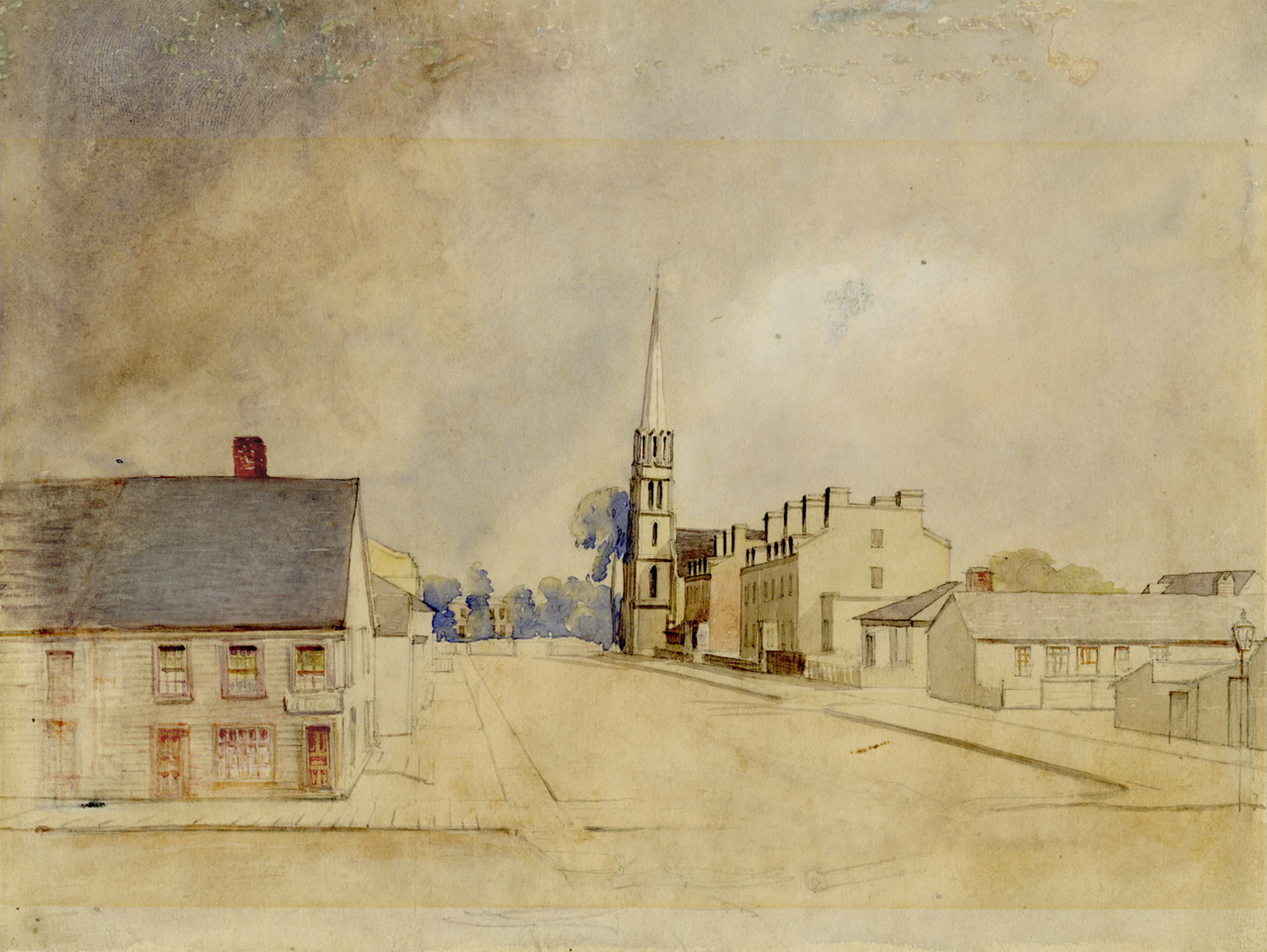 The Church of St. George the Martyr, on John Street north of Queen, was opened in 1845, when the growing population warranted the founding of a third Anglican congregation. Toronto Anglican churches were never segregated. Pew records indicate that the well-to-do Hubbard and Abbott families attended and supported this church, a reflection of their growing affluence. 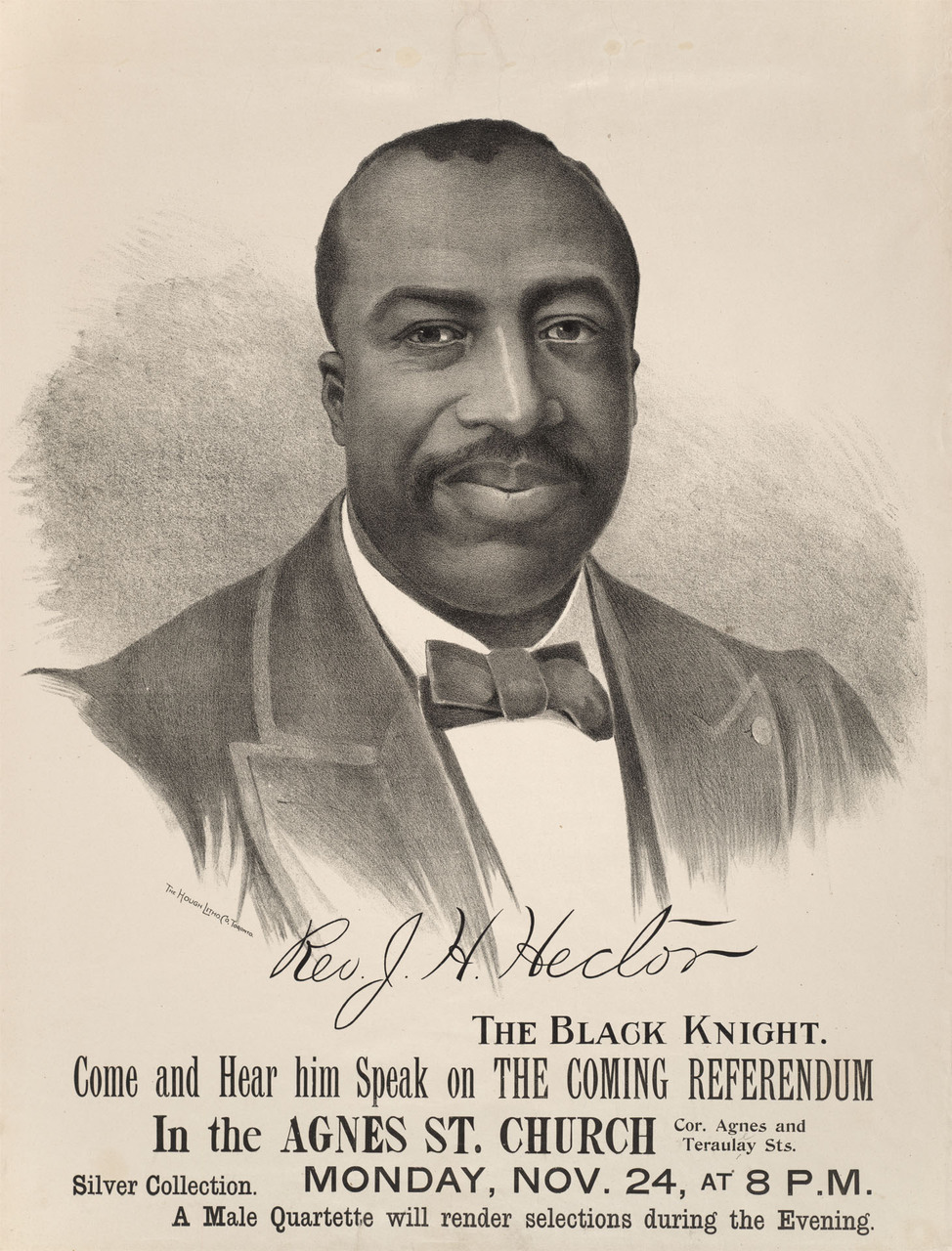 Reverend J. H. Hector, known as “The Black Knight”, was a skilled orator, and member of the American-based Prohibition Party. He lectured on the subject of temperance at the Agnes Street Methodist Church in 1902, just prior to the Ontario Prohibition Referendum held that December. The Agnes Street Church was on the corner of Agnes St. and Teraulay St. (now Bay St.). It served the African-Canadian community in the northern part of St. Johns’ Ward.