Uncovering the stories of freedom

The first blacks in the Town of York were the enslaved servants of elite families, black Loyalists, and other free people. They were joined by freedom-seekers, fully intent on building a new home and a new future. Toronto’s earliest black community was centred around the business district at the foot of Church Street, near the Market and the African Baptist Church. Newcomers arriving after Virginia's Nat Turner Slave Rebellion of 1831, found homes on Toronto's York Street, and along Queen and Richmond Streets. Later migrants would settle in Macaulaytown, a transitional immigrant neighbourhood, later known as St. John’s Ward.

It is difficult to uncover the stories of Toronto's earliest black residents, but we know they opened businesses: barbershops, restaurants, lumber yards, a construction company, and the city’s first taxi business. They also invested in real estate. Successful African-Canadian businesspeople provided jobs for incoming black refugees, and helped them to find a place within the community. Women who came alone, or with small children, and those in straitened financial circumstances took in laundry, provided hairdressing and dressmaking services, and worked in private homes as housekeepers, skilled childcare workers. They were also highly valued as cooks.

Community members founded benevolent and burial societies, self-insurance organizations, charities, and mutual aid systems to support those in need. =Fraternal orders and associations offered an outlet for ambitious men and women who were largely excluded from political and social advancement within the city's dominant white society.

Educated African-Canadians rose to distinction in a number of professions, including medicine, journalism, teaching and the military. Life in Toronto became an experience of stability, success and independence. New stories from this early community continue to emerge, as we uncover more and more evidence of the achievements of early black Torontonians.

Topographical plan of the city and liberties of Toronto in the province of Canada
Surveyed, drawn and published by James Cane, Tophl. Engr. (Detail)
Toronto: James Cane
1842
Colour lithograph map

This detail of an 1842 map of Toronto and has been annotated to indicate the homes and business of African-Canadians. The map was compiled using information extracted from various sources, such the Toronto Street Directories and as Peter Gallego’s 1840 census of African-Canadians living in the city.

Peter Gallego was the son of Philip Gallego, an immigrant from Richmond, Virginia, who owned land on York Street near William Lyon Mackenzie and the homes of John Strachan and his son.

In 1840, Gallego completed the census of blacks living in Toronto: there were 525. Although not complete, the census is an invaluable tool for identifying black families, locating their homes and business, and uncovering their history. Consult the map key, the ligher-coloured area on the left side of the image, to see where some of these black Toronto residents lived. 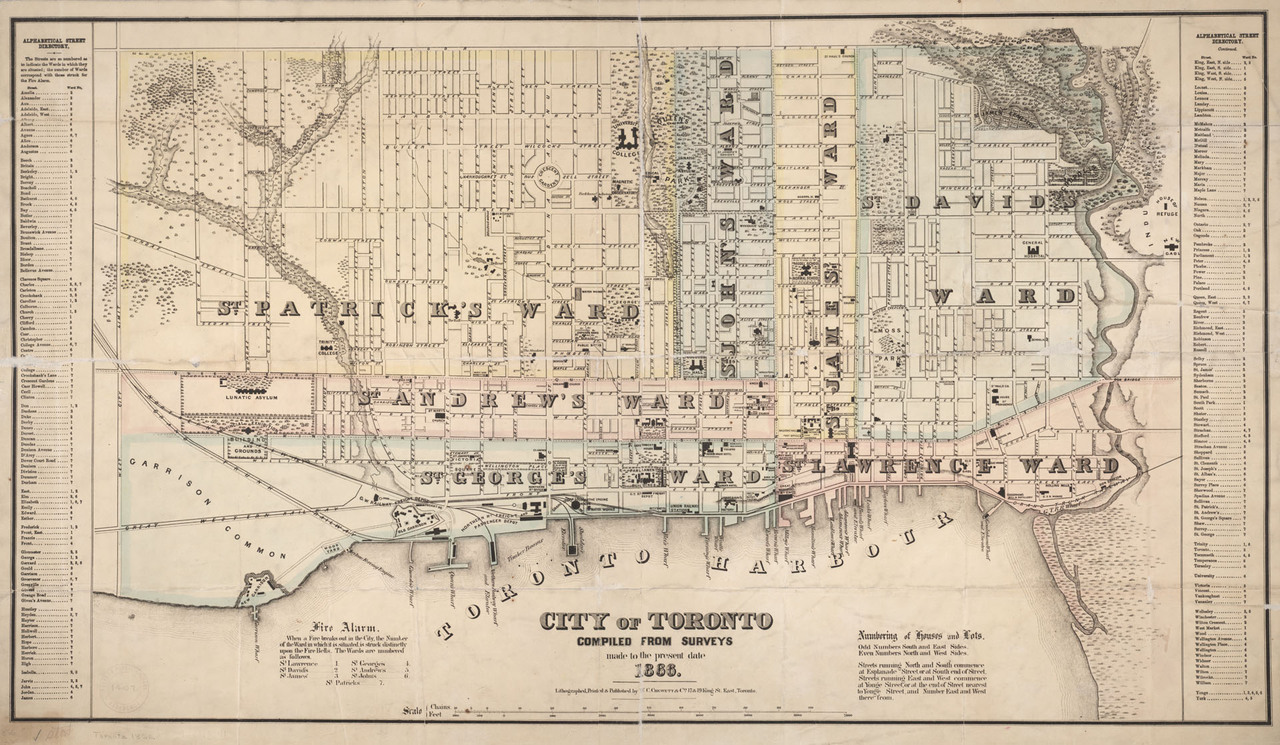 Centrally located, St. John’s Ward was the landing point for many immigrants throughout the 1800s. Fugitive slaves Thornton and Lucie Blackburn were early landowners who helped other fugitive slaves find affordable accommodation in the area. Although St. John’s Ward grew to be overcrowded and run down, it provided newcomers with a fresh start and opportunity. Many blacks who initially settled here thrived and became successful in their fields, trades and professions. 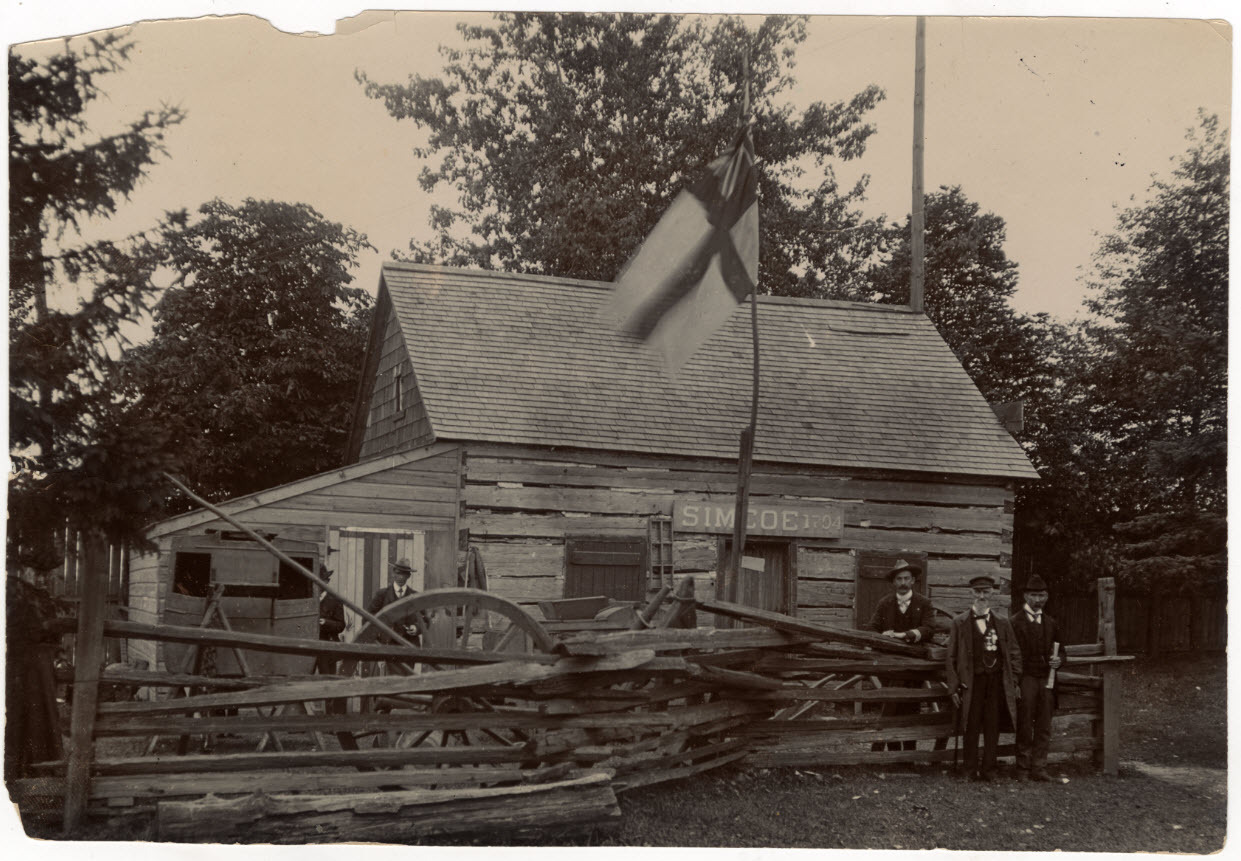 Courtesy of the York Pioneer and Historical Society Archives

In 1833, Thornton and Lucie Blackburn were the subject of the first fugitive slave extradition case between Canada and the US. Freed to begin new lives in Canada, they settled in Toronto where Thornton Blackburn started the first taxi service in Toronto. His red and yellow taxicab was named "The City." Blackburn retired in the 1860s, but for many years his cab was on display at the Scadding Cabin Museum, where it was recognized as an important piece of Toronto’s history. 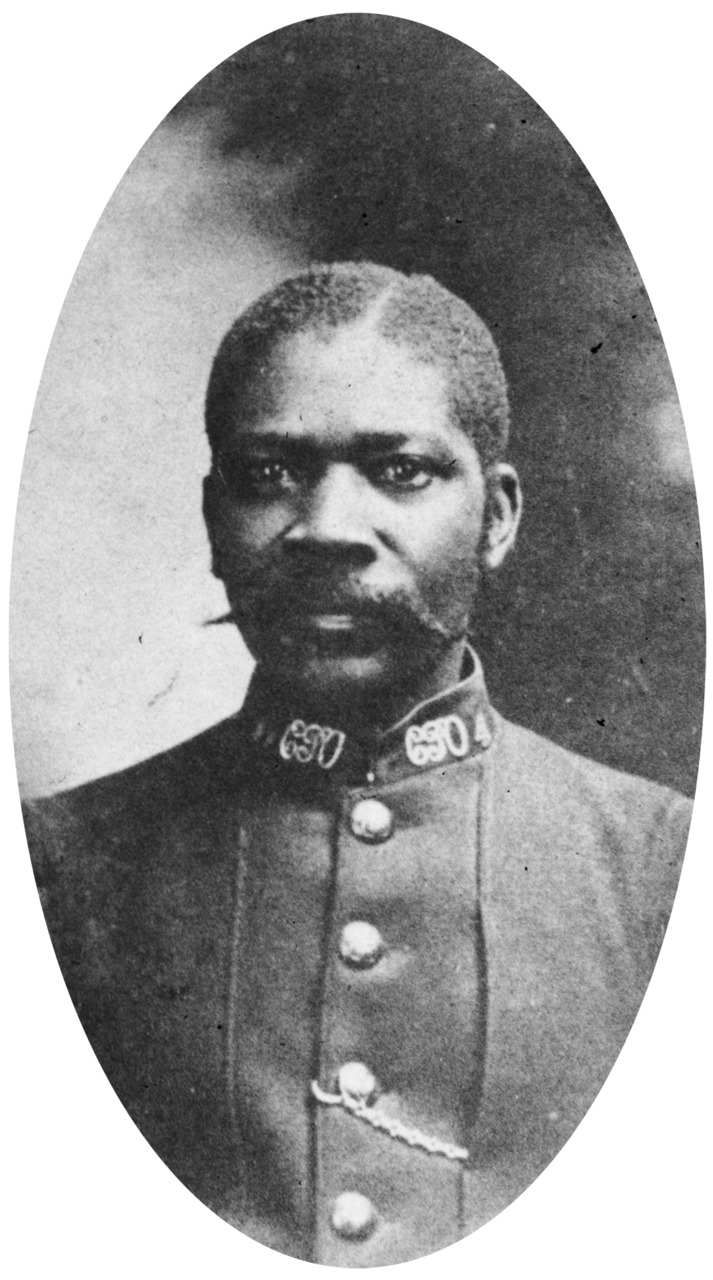 Albert Jackson
From: The Negro in Ontario in the Nineteenth Century (An exhibition of Books, Newspapers, Pictures and Manuscripts) held at Toronto Public Library, November 4-16, 1963

Albert Jackson was the youngest son of Ann Maria Jackson of Wilmington, Delaware, who escaped via the Underground Railroad. She fled by way of Philadelphia, bringing seven of her children out of slavery after her eldest two boys had been sold away, and her husband had died in grief. The Jackson family arrived in Toronto in 1858, and were welcomed by freedom-seekers already established in the city. They eventually settled in St. John’s Ward, where Mrs. Jackson took in laundry to support her family and where her children went to school.

In 1882, Albert Jackson became the first African-Canadian postman. After protests by white inside workers, who were of a lower rank than postmen were, he was not permitted to deliver letters and was relegated to the job of hall porter. The black community launched a vociferous protest, which was covered in the local press.

Eventually Sir John A. Macdonald intervened, and Albert Jackson was reinstated as a mail carrier. This was a difficult election year for Macdonald, and he needed the black vote to carry St. Johns Ward. Jackson remained in this position for thirty-six years. In 2013, city council approved a laneway naming in his honour. Albert Jackson Lane is located on Harbord Street, between Brunswick Avenue and Borden Street.

Our Coloured Citizens
From: The Globe, 5 February 1886

William Peyton Hubbard was the son of former slaves from Virginia. He was born in a rural log cabin, near the modern intersection of Bloor and Bathurst. He attended the Model School attached to Toronto's first teachers' college, the Normal School. Hubbard became a professional baker and invented and patented the "Hubbard Oven".

Encouraged by George Brown, founder of the Globe, to consider a career in politics, Hubbard ran for city council and was first elected in Ward 4, a wealthy and very predominantly white district, in 1894. William Peyton Hubbard, remembered fondly as “Old Cicero”, had a distinguished career in municipal politics. He was a member of the Board of Control for eight years, and was the only black Deputy Mayor in the history of Toronto. He served as an alderman until 1914.

Hubbard was instrumental in the establishment of Toronto Hydro Electric Power. He was an advocate for the fair assessment of Toronto Chinese laundries, and was the chief advocate of the City’s decision to acquire the Toronto Islands. 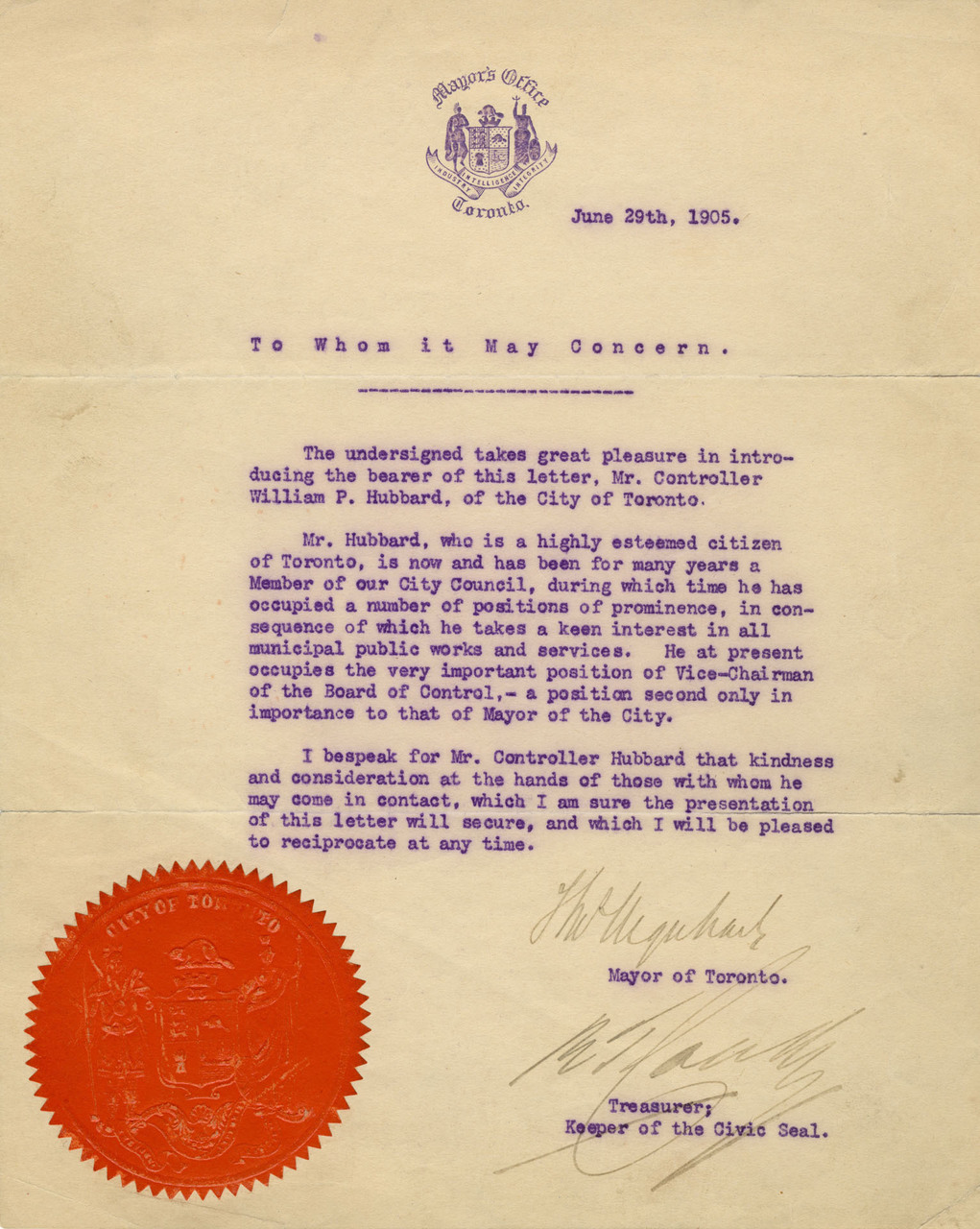 Thomas Urquhart, the Mayor of Toronto, issued this certificate of recognition to Hubbard for his outstanding service and dedication on the Board of Control. 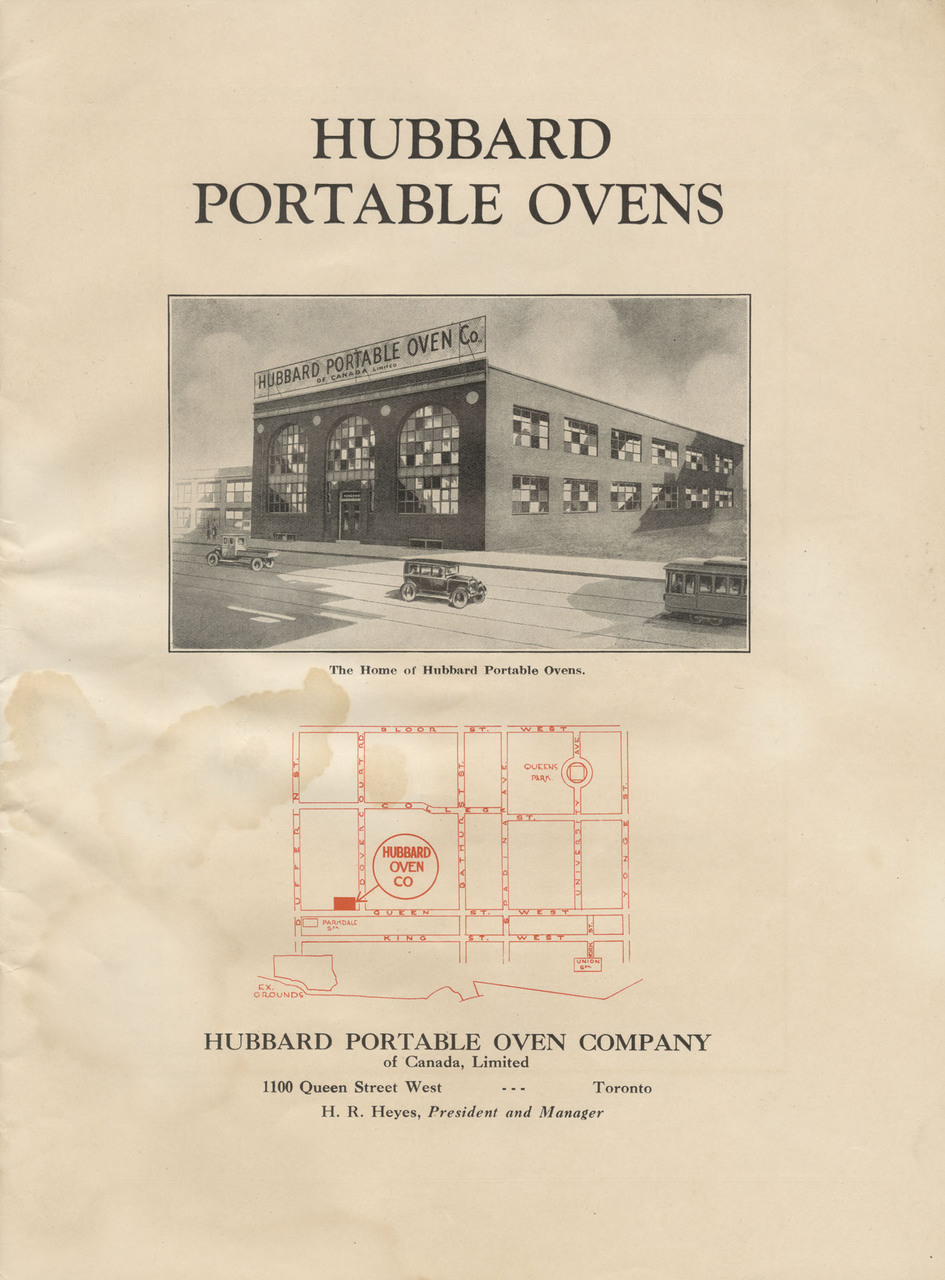 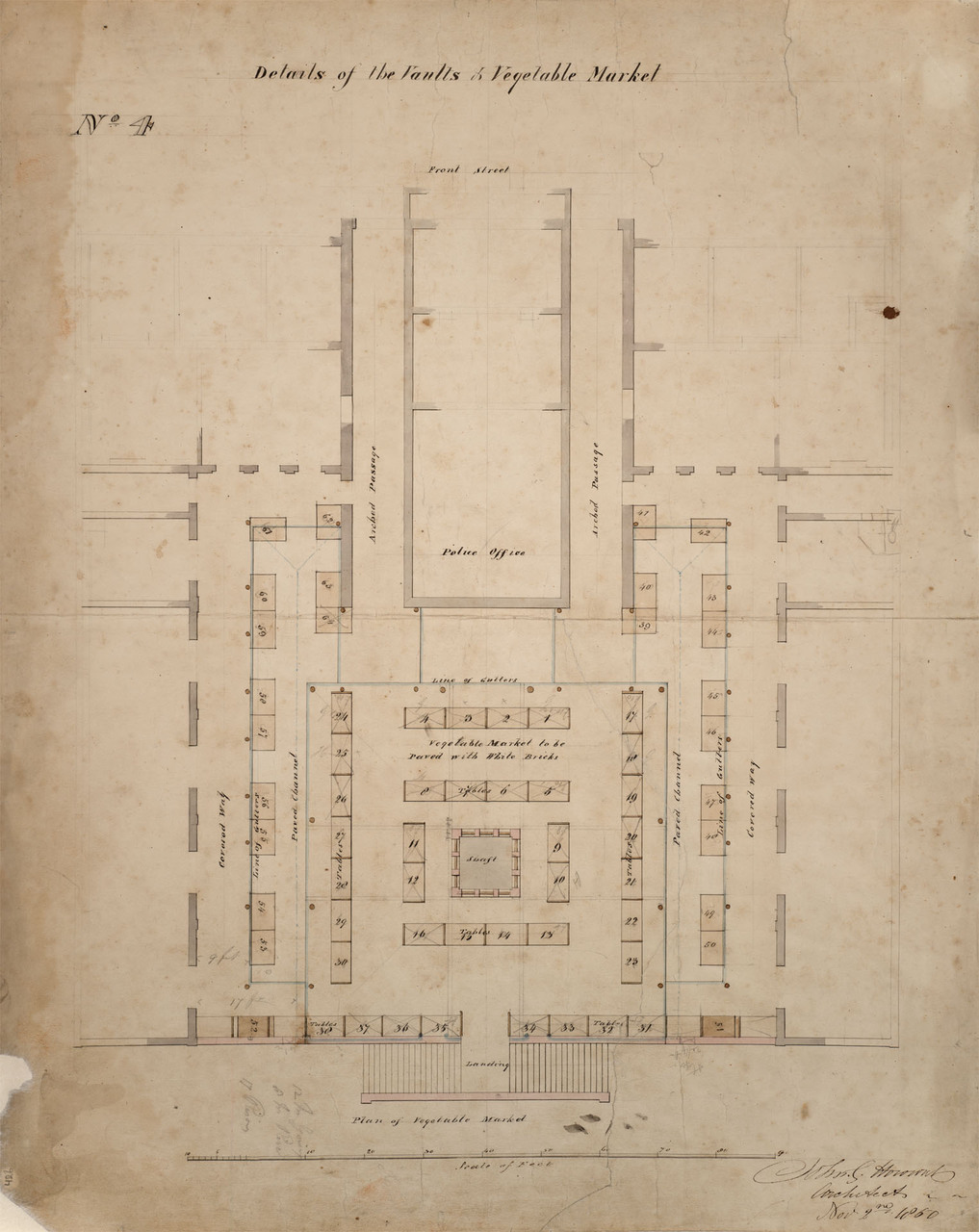 William Hickman Sr. was a veteran of the War of 1812, and earned his freedom for his military service. Hickman and his family arrived in Toronto in 1833. By the 1850s, they were operating a number of established businesses in the city, including a barber shop, several grocery stores, and a stall in the St. Lawrence vegetable market. One of Hickman’s sons married Harriet Butters, whose stall was next to the Hickmans' in St. Lawrence Market.

Fun for the Millions
1858
Theatre poster

While Toronto was a haven for many African-Canadians and freedom-seekers, the city’s black population continued to endure racism and negative stereotypes. At this time, blackface minstrel shows were a popular form of entertainment among the white population in the city. White actors would paint their faces with soot or shoe polish, and perform on stage, mimicking stereotyped behaviours. To the African-Canadian population, the blackface minstrel was degrading and insulting. The community lobbied the city to have them banned as a form of entertainment in Toronto.

Led by Wilson Ruffin Abbott, a series of petitions were brought before Toronto City Council, asking that this form of entertainment be banned. The first of these petitions, in 1840, included the names of 45 black Toronto citizens. It was unsuccessful. The black community continued to petition against the degrading minstrel shows. In 1856, a more successful petition was brought forward, and Toronto City Council ruled against the staging of a black minstrel shows, at least for a time. However, just two years later in 1858, this theatrical piece was performed in an Adelaide Street theatre. 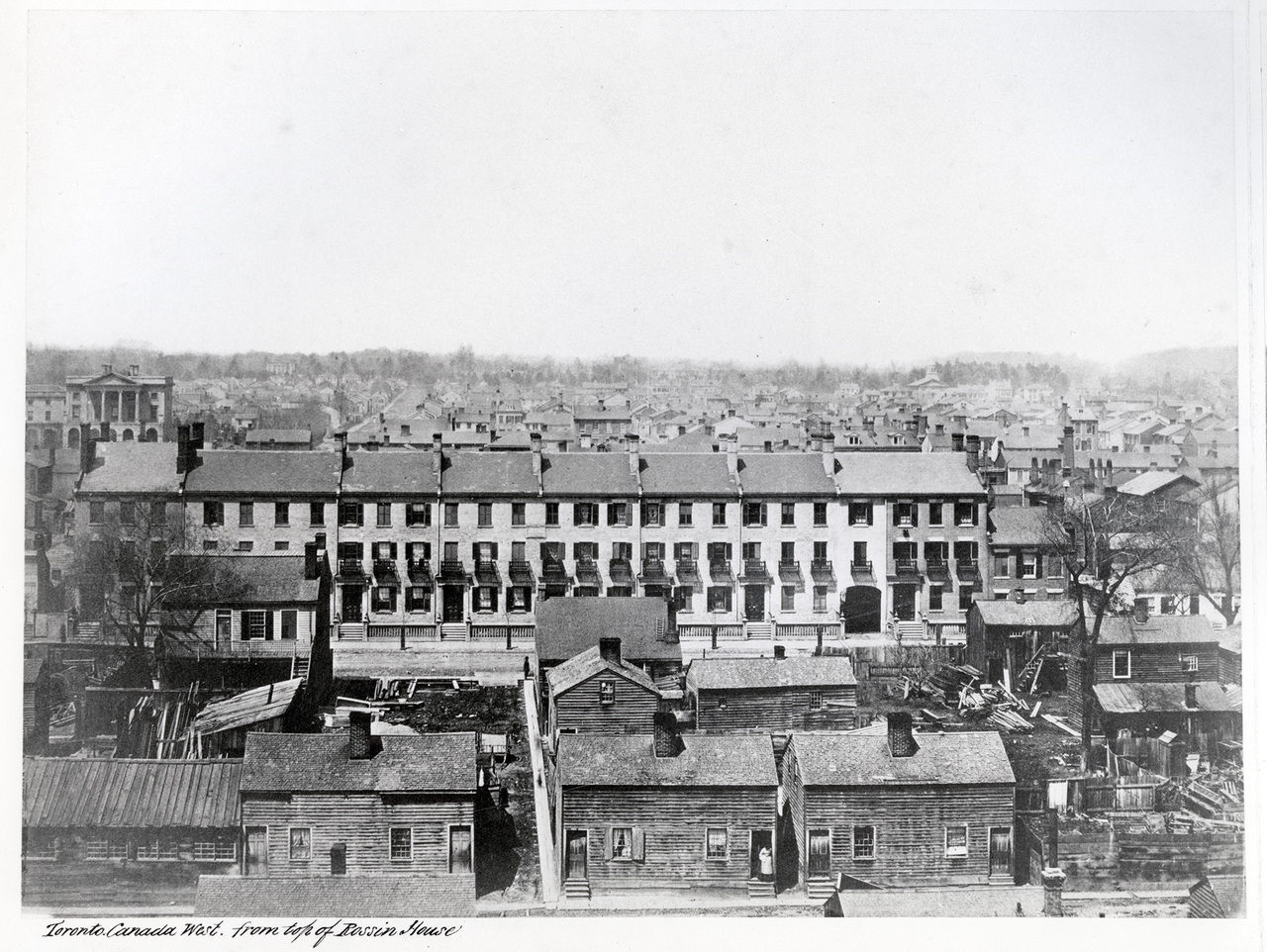 Toronto from the top of the Rossin House Hotel, looking north
Armstrong, Beere and Hime
1856 or 1857
Photograph

In 1856, the photography firm of Armstrong, Beere and Hime were commissioned to take a panoramic photograph of Toronto in an unsuccessful bid to have the City of Toronto named as the capital of Canada. The series of thirteen photographs were taken from the top of the Rossin House Hotel, which stood at the corner of King and York Streets, and was the tallest building in the city. This image, looking north across King Street to Boulton Street in the foreground, has captured a candid shot of what is believed to be the earliest photograph of a black woman in Toronto. Detailed research overlaying the map with a fire insurance plan, and comparing it to the Toronto City Directory for that year, has been unsuccessful in identifying the woman.

Do you know who this person might be? Can you help us uncover another piece of Toronto’s social history? Click on the image to add your comments. 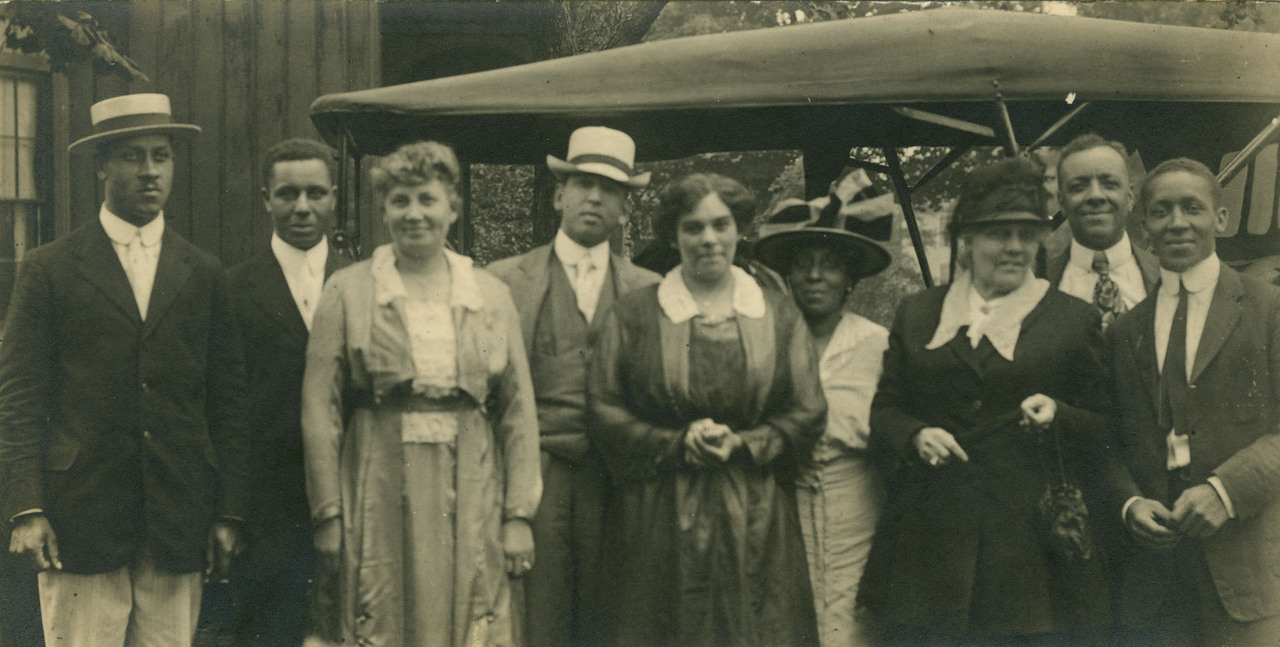 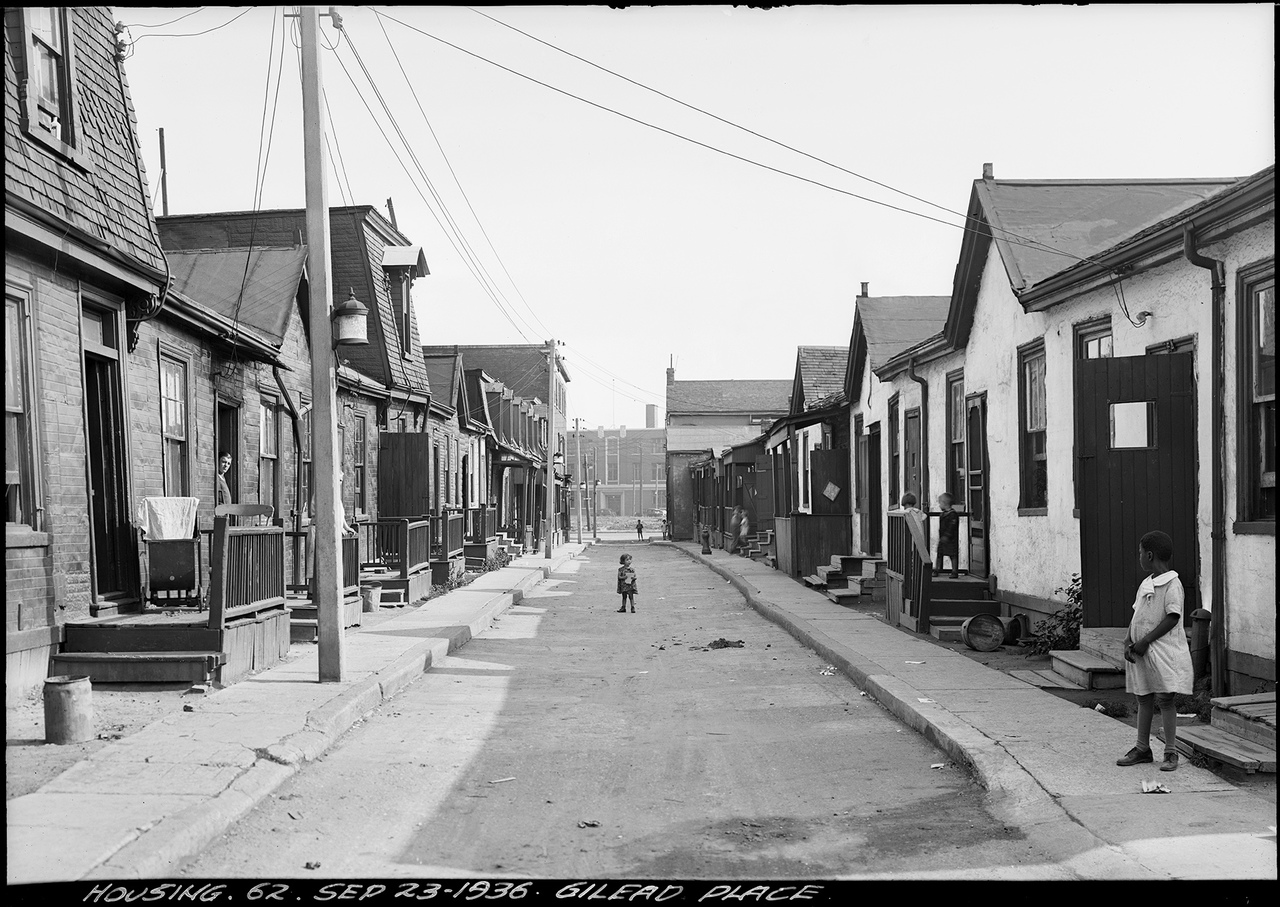 This candid image has captured the interaction between white and black children in Toronto’s East End. Research into the city directories has again been unsuccessful in identifying the families.

Do you know who these people are? Can you help us uncover another piece of Toronto’s social history? Click on the image to add your comments.