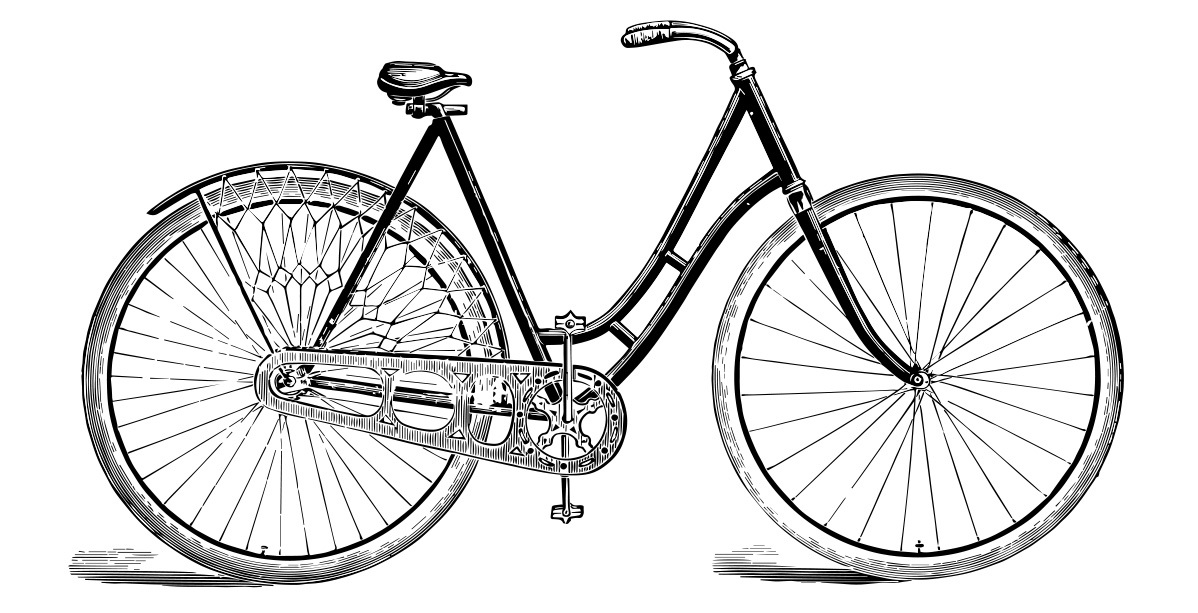 The first bicycles, brought to Canada around 1865, were known as “boneshakers”. Largely homemade, they offered an uncomfortable and bumpy ride.

The 1870s saw the introduction of the “high wheeler”, or penny farthing, featuring a large front wheel — more than a meter in diameter — and a much smaller back wheel. Expensive and unsuited for rough, unpaved roads, these early bikes were used for recreation more than transportation. These new “high wheelers” captivated Canadians and races became common in Toronto by the 1880s.

The 1890s saw the appearance of the first “safety” bicycles, featuring two wheels of equal size. As the name suggests, this new design was far easier and safer to ride. Whereas very few women rode high wheelers, the safety bicycle offered women of the period a rare opportunity for recreation and freedom. 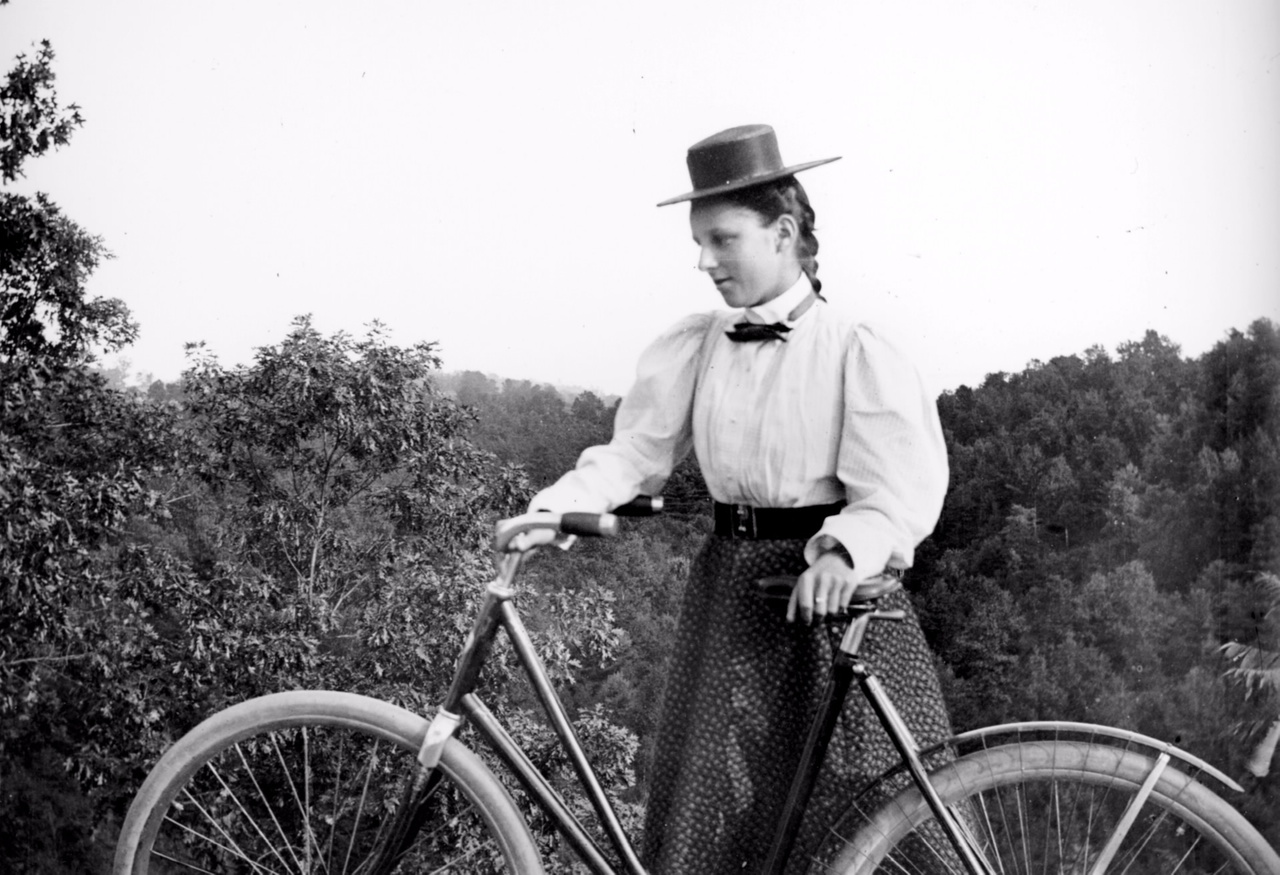 Women were quick to take to the safety bicycle which had a drop-frame format that made cycling far more comfortable for women. 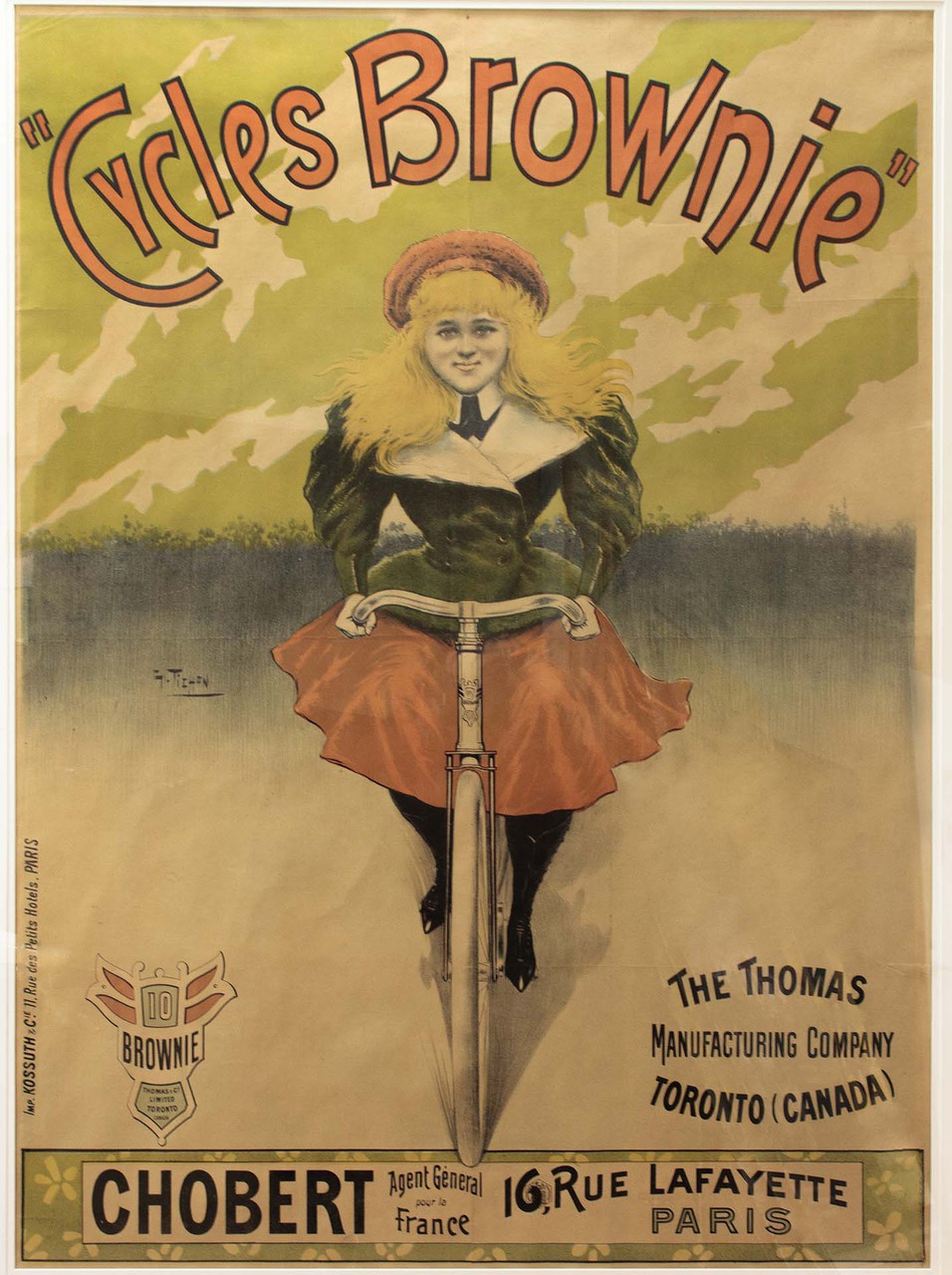 The Thomas Manufacturing Company manufactured bicycles for H. A. Lozier & Co. at a branch plant on Weston Road in what was then known as the Toronto Junction. In 1899 the plant was sold to the Canadian Cycle & Motor Co. Ltd.

Charles Tichon was a French artist who created advertising posters for various manufacturers including agricultural machinery, aircraft and, most prominently, bicycles. 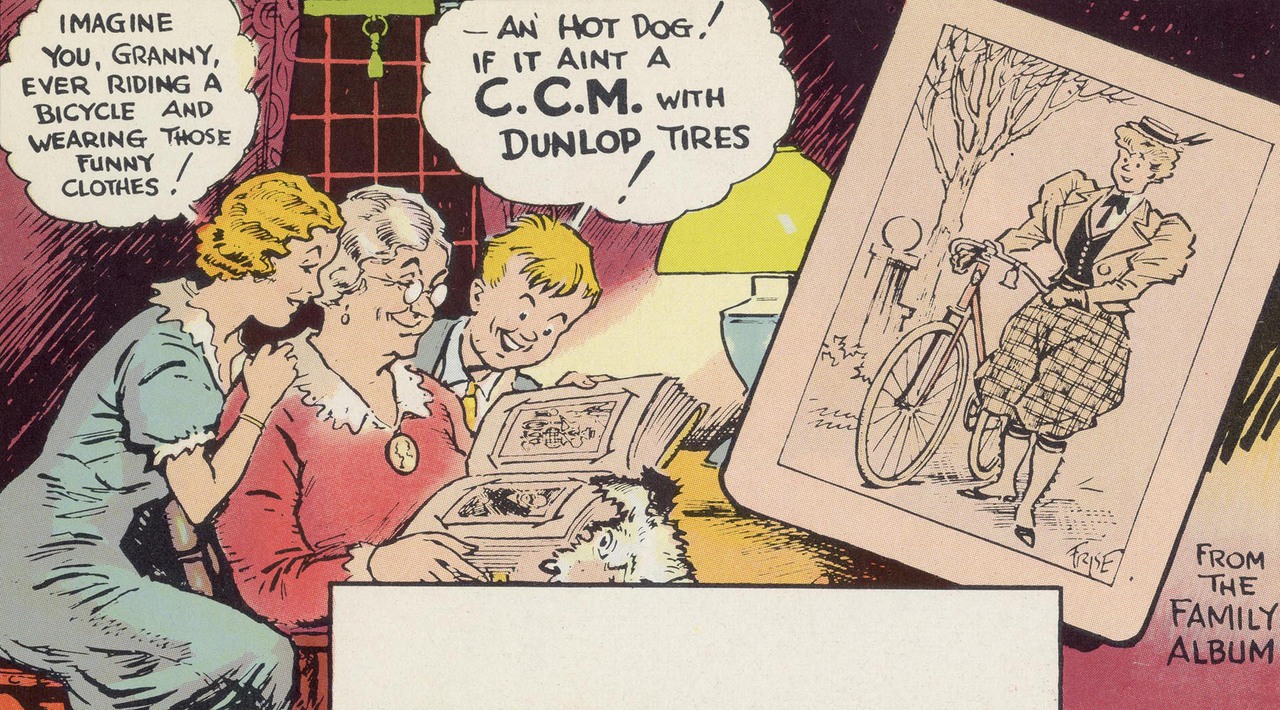 The peak of the bicycle craze in the 1890s brought changes to women’s fashion including the introduction of split skirts and bloomers, like those illustrated in this advertising blotter for the Canada Cycle & Motor Co. Ltd. (C.C.M.). C.C.M. was formed in 1899, the product of a merger of five leading Canadian bicycle manufacturers.

Advertising blotters were very popular in the 1930s and 1940s. On the reverse side of the ad, there was a layer of soft absorbent paper which was perfect for blotting excess ink from fountain pens. 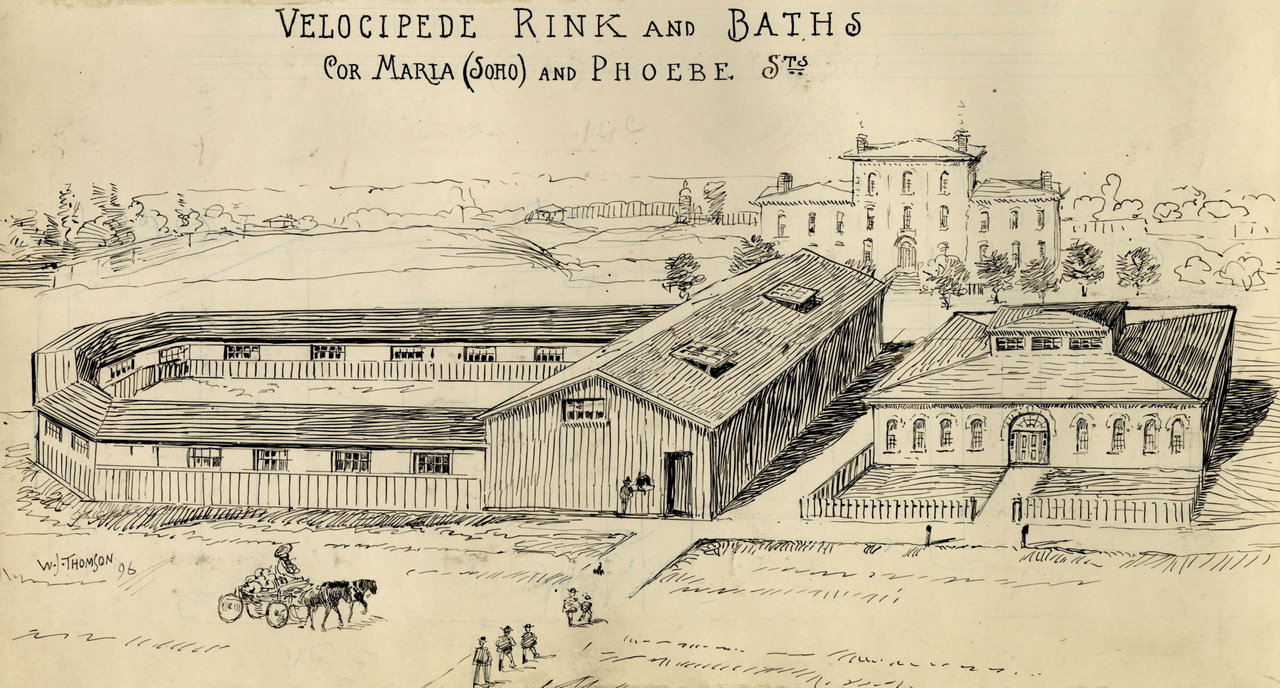 Indoor velocipede (a type of bicycle) rinks were built in Canadian cities offering riders of the rough and rickety “boneshaker” bicycles a smoother surface to ride on. Toronto’s early cycling rinks, including this one at Phoebe and Soho streets, appear to have been very short-lived. 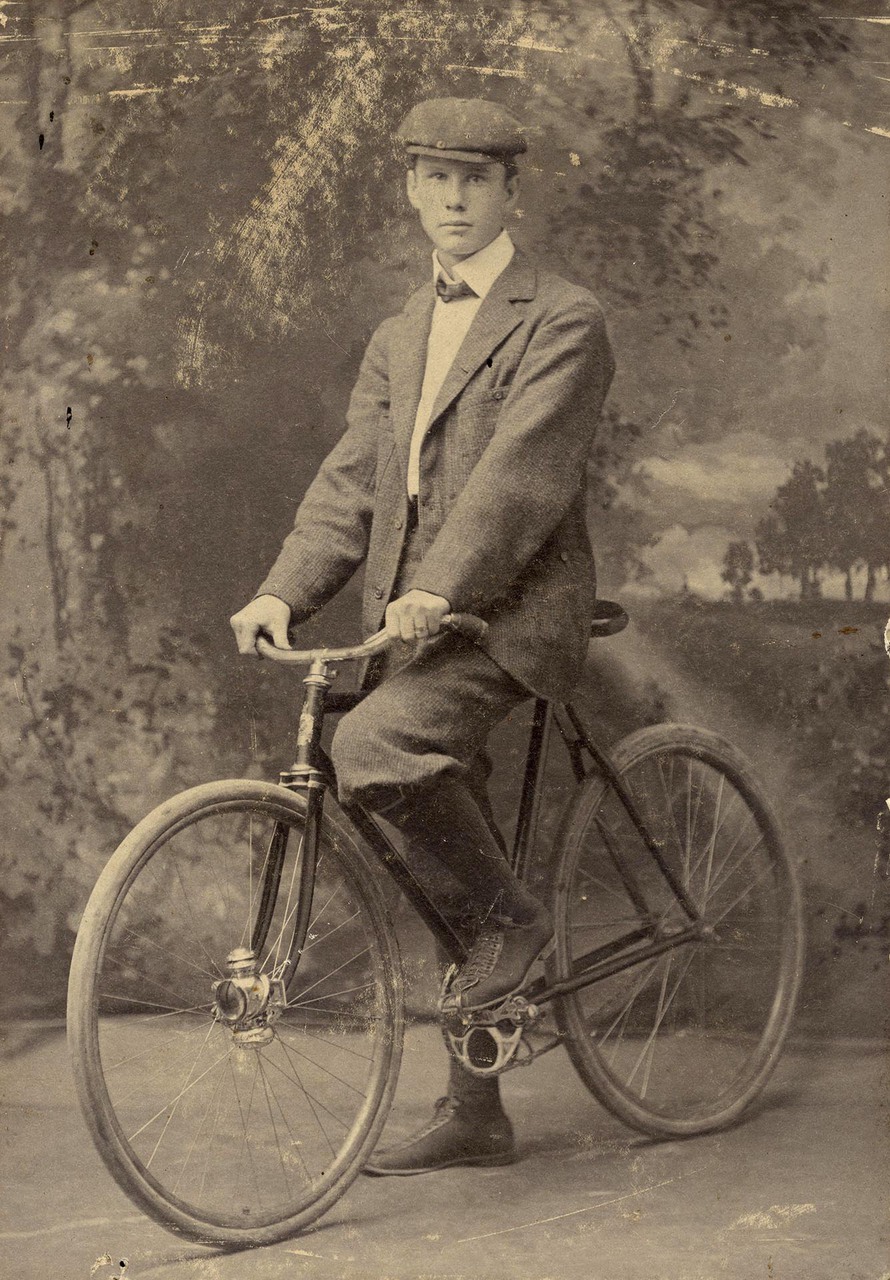 This rare studio portrait shows the young Lou Marsh (1879 –1936) seated on a bicycle. Marsh was a sports columnist and editor who worked for the Toronto Star for 43 years. Shortly after his death, the Lou Marsh Trophy was created in his name to honour Canada’s best athletes as chosen by sports writers. 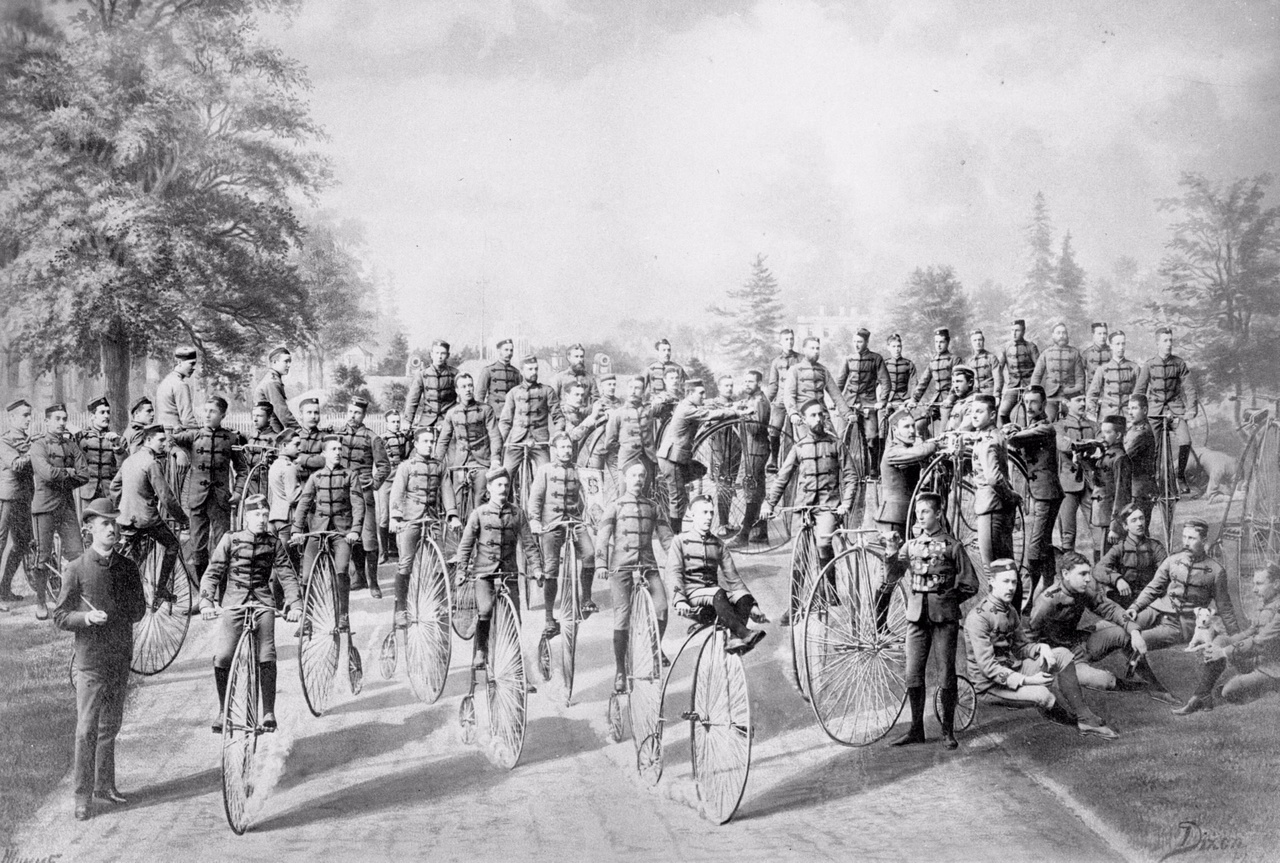 The Wanderers, one of Toronto’s more prominent clubs of this time period, organized a cycling trip on Lake Ontario in early 1884. Describing the excursion in The Canadian Wheelman, they wrote that “some good sport was had on the occasion, the only drawback being an accident which occurred with an iceboat, which collided with one of the bicycles, breaking it into several pieces.”

Tem Lawlor, of the Wanderers’ Bicycle Club, is reported to be the first Torontonian to ride a modern safety bicycle. 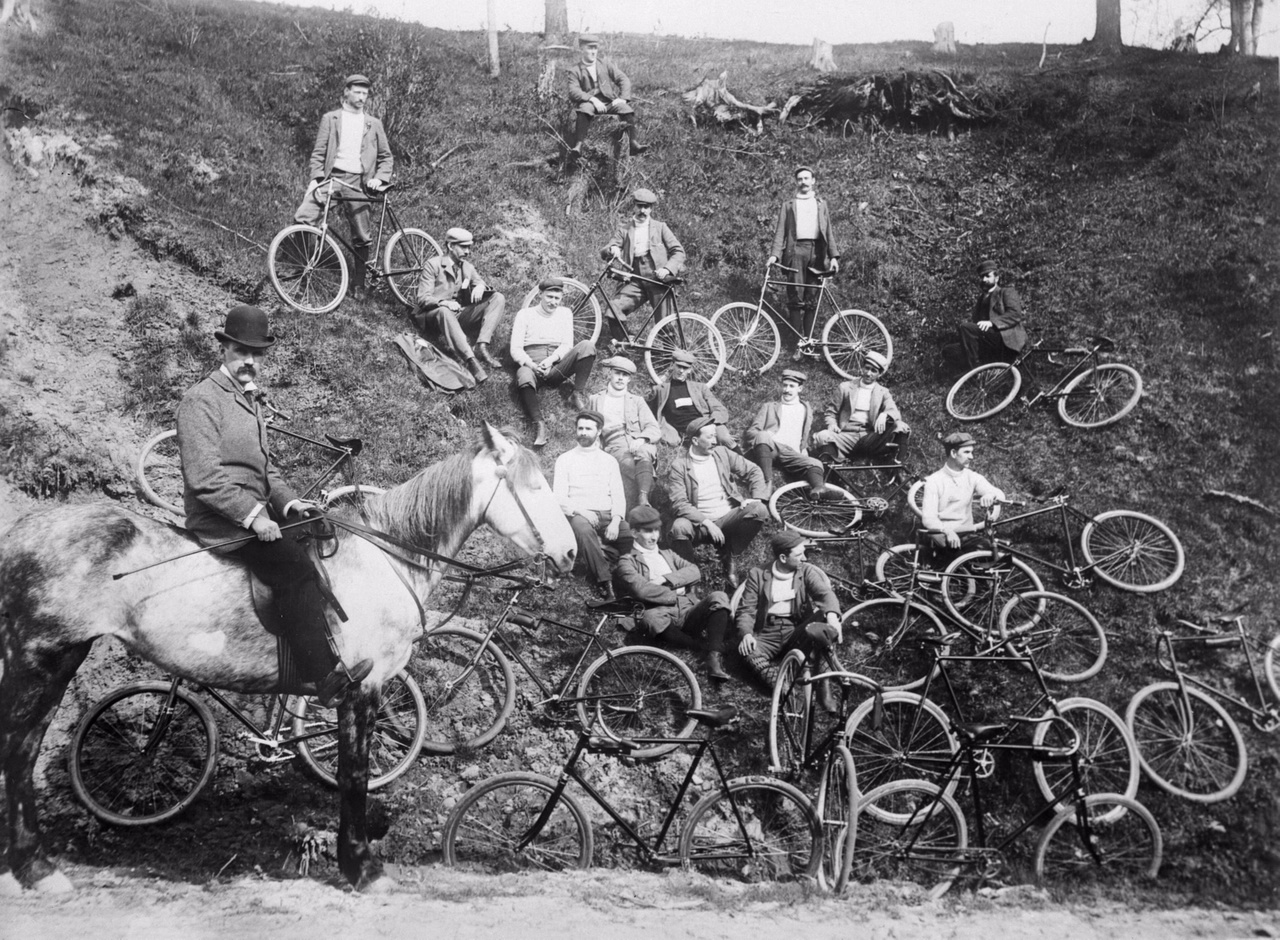 The introduction and mass production of the more affordable safety bicycle helped popularize cycling and led to the proliferation of social cycling clubs like this one in Swansea. The man on the horse is identified as Major Voakes. 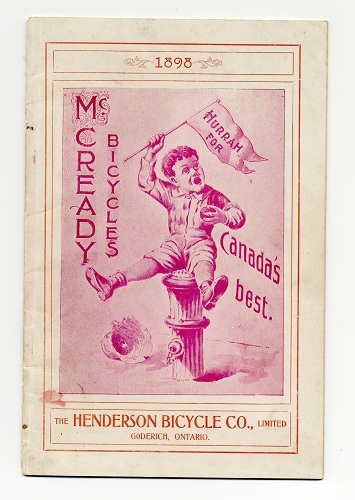 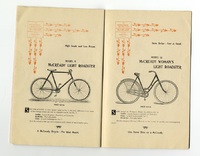 The mass production and sale of Canadian-made bicycles was essential to the popularization of the sport in the late 19th century. The Henderson Bicycle Co. of Goderich, Ontario, advertised these models as some of the least expensive in the world. 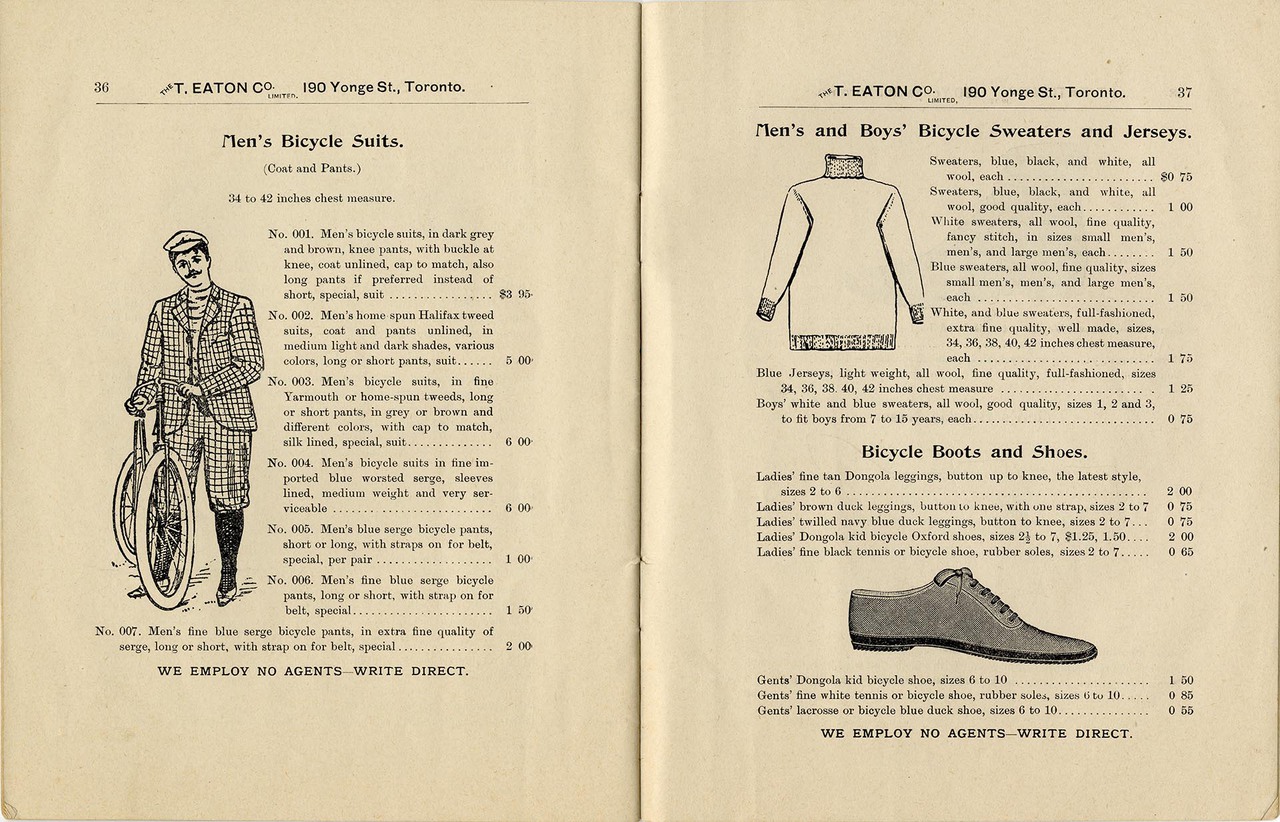 Stores and manufacturers were also quick to profit off of changes in cycling fashion. Over the course of the 1890s formal, tailor-made formal cycling uniforms – worn at parades and other club events – were slowly replaced by more casual dress. 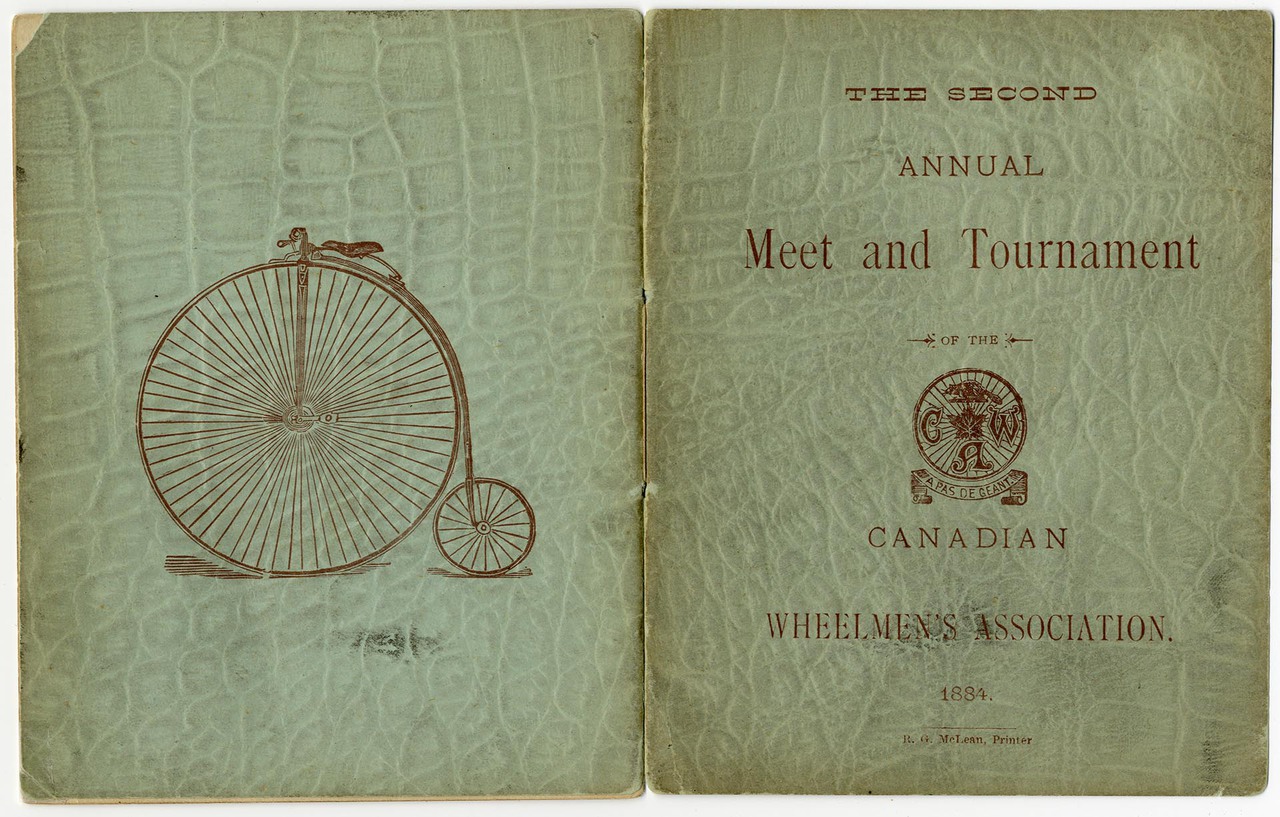 Founded in St. Thomas, Ontario in 1882, the Canadian Wheelmen’s Association set out to promote and organize cycling across Canada. The organization also campaigned to improve road conditions and published some of the first travel guides and road maps in Canada. It was renamed the Canadian Cycling Association in 1968. 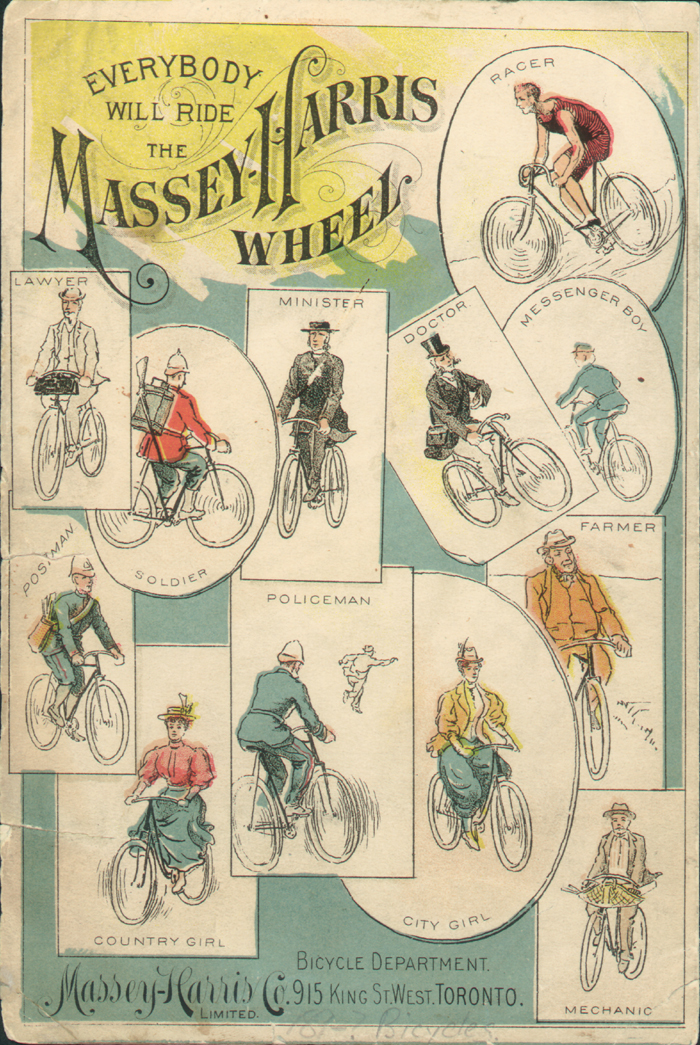 This delightful advertisement from the 1890s captures the wide appeal of cycling at the height of the bicycle craze.

This is the third page of the advertisement. You can see the whole pamphlet on our Digital Archive.

← Other field and lawn sports
On the water →
On the road